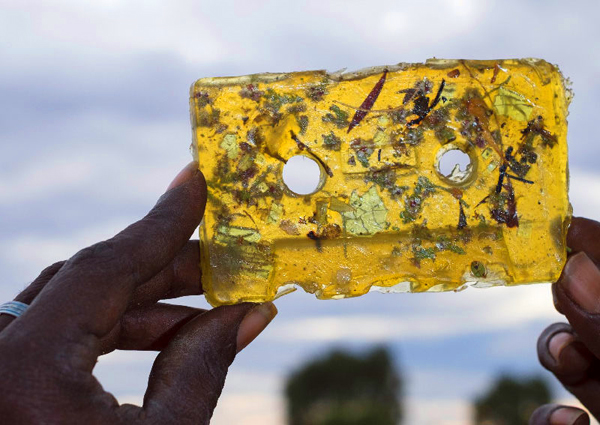 Image: Pamela Hogan holding her cassette soap sculpture made of natural dyes and organic materials from the Ngaanyatjarra Lands.

Curator Glenn Iseger-Pilkington believes the exhibition Ngurra will challenge visitors to think about where the Aboriginal art we see on gallery walls originates and the worlds Indigenous Australians navigate.

“It’s an invitation from Ngaanyatjarra people to visitors to come on a journey,” the South Australian Museum curator says.

“I’m hopeful that visitors are challenged and excited by what the exhibition offers and that it helps them develop a few tools to help them conceptualise Aboriginal Australian life in all of its diversity. It’s similar to every Australian’s life; there are different ways of living and navigating Australia. The mainstream is one of those, there is this whole other world of story and history and reality happening in Australia that people don’t get to see.”

The title of the SA Museum exhibition, Ngurra, which is part of TARNANTHI, roughly translates to home, but it has a deeper meaning.

“It’s a combination of everything really,” Iseger-Pilkington says. “Because home is country and every Ngaanyatjarra painting maps country, so a painting speaks to home and speaks to a really enduring relationship to concepts around ngurra.”

The Ngaanyatjarra Lands (NG Lands) home is found in the Western Dessert. The communities from this region are known for their striking weaving, carving and painting works. This exhibition, like SA Museum’s spectacular Yidaki , will feature AV to tell stories the Ngaanyatjarra want to share.

“The arts centre out in the Ngaanyatjarra Lands were looking at what their needs were as organisations and what their risks were looking forward,” he says. “They really wanted to focus on a project that looked at intergenerational knowledge, the transfer of traditional knowledge across generations but also the way that young Ngaanyatjarra people see and project themselves. They wanted to cultivate a project that would enable a greater voice for young people in the mediums they want to work in, which are outside of the traditions of painting, carving and weaving.”

Iseler-Pilkington is the SA Museum’s first Indigenous curator and he spent half of the past year in the NG Lands.

“It’s a collaboration between arts centres, museums, artists and community members about the stories they want to share. It’s different from Yidaki in that this exhibition was born from issues that were arising in the Lands a few years ago. And we’ve come on to partner, it’s about working together to make sure what the communities need to get from this is really evident in the exhibition but at the same time sharing the Ngaanyatjarra story with Australia.”

This is central to Iseler-Pilkington’s curatorial practice.

“I grew up in a half-European, half-Aboriginal Australian family, what I’ve always tried to implement is that you’ve got to have a First Person voice and narrative in any story to be really powerful. Equally, what was really interesting is we weren’t going there to tell that traditional central Australian narrative. This is a story about Ngaanyatjarra people living in the here and the now and what that means in a real way, which isn’t about the romanticised desert experience. It’s about the realities of life.

“I spent almost six months of the last year out on the Lands living and working with people, building trust with people and it took six months before that trust was in place for the next layer of story they were willing to share. It was a great experience and reaffirmed the Museum’s need to be making meaningful commitments to spending a lot of time with the communities to tell stories in a powerful way that reflects Aboriginal sensibility and life in Australia. You can’t just jump in a plane, pick up some paintings and then tell that story. You are only ever skimming the surface if you don’t start making meaningful endeavours into your relationships with communities.”