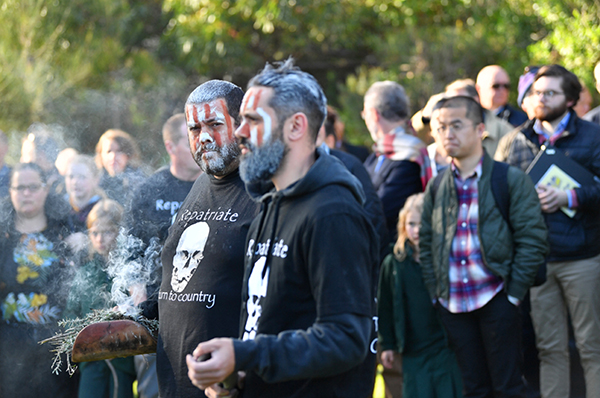 Local Indigenous members are seen during a burial ceremony to return of Kaurna Old People at Kingston Park, Adelaide. AAP.

The remains of 11 Indigenous people have been buried in Adelaide’s south after being held in museums in the UK and South Australia. See video.

The laying to rest of six Indigenous Kaurna people that were held in the UK since the early 20th century has taken place in South Australia.

They were repatriated from London’s Natural History Museum, arriving in Canberra this week, before being transported to their final resting place in Adelaide’s south on Thursday.

The remains of five other Indigenous people, which were being held at the South Australian Museum, were also buried.

“We believe, as Kaurna people, that our ancestors need to be back home,” traditional owner Allan Sumner said.

“We have many more other old people, and we are going to continue to put our people to rest.”

The head of humanities at the South Australian Museum Professor John Carty said the graves of many Kaurna people were disturbed in the early-to-mid 20th century due to development.

“It’s a museum, that’s not the right place for people, so our work now is to take them out of the keeping place and getting them back to country where they belong,” Professor Carty told AAP.

Mr Carty said the museum has been working to repatriate remains since the 1980s.

Among those remains was Professor Peter Buckskin’s ancestor, who was once buried on South Australia’s Yorke Peninsula.

Professor Buckskin travelled to the UK in March to formally receive the remains, which he said were dug up during early copper mining exploration 100 years ago.

“He was stolen … donated,” he said in March.

“Imagine if that happened to a member of your family. Who finds skeletal remains and donates them?”