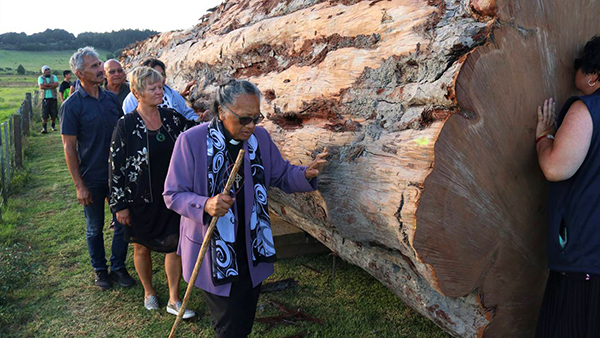 Some of this giant ancient swamp kauri tree uncovered at Ngāwhā has been used by researchers to confirm the date when the Earth reversed its magnetic poles. Photo / Peter de Graaf.

The findings were published last week in the international journal Science.

The findings come two years after a particularly important ancient kauri tree was uncovered at Ngāwhā. The massive tree – with a trunk spanning more than two and a half metres – was alive during the event, which is known as the Laschamps geomagnetic excursion.

The research confirms that the event was around 42,000 years ago and the researchers are using a modern take on interplanetary travel to bring their work up to date – now calling the polar switch the Adams Event after The Hitchhikers Guide to the Galaxy by Douglas Adams.

“Like other entombed kauri logs, the wood of the Ngāwhā tree is so well preserved that the bark is still attached,” UNSW’s Dr Jonathan Palmer, a specialist in dating tree rings (dendrochronology), said.

Study authors from UNSW Sydney, the South Australian Museum, Niwa and the University of Waikato, dubbed this episode the Adams Transitional Geomagnetic Event, or Adams Event for short – a tribute to science fiction writer Adams, who wrote in The Hitchhikers Guide to the Galaxy that 42 was the answer to life, the universe, and everything.

“For the first time ever, we have been able to precisely date the timing and environmental impacts of the last magnetic pole switch,” Chris Turney, a professor at UNSW Science and co-lead author of the study said.

“The findings were made possible with ancient New Zealand kauri trees, which have been preserved in sediments for over 40,000 years. Using the ancient trees we could measure, and date, the spike in atmospheric radiocarbon (the radioactive isotope or type of carbon) levels caused by the collapse of Earth’s magnetic field.” 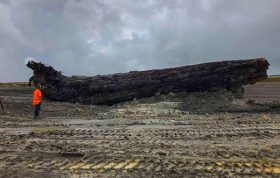 The giant swamp kauri uncovered at Ngāwhā in 2019.

Cross-sections from several swamp kauri in Niwa’s archive were analysed by principal scientist Dr Andrew Lorrey to determine their age.

“These kauri trees also lived during the time period leading into the Adams Event and provide a baseline of normal radiocarbon levels prior to the unprecedented rise associated with the Adams Event,” Lorrey said.

Using radiocarbon dating, the team tracked the changes in radiocarbon levels during the magnetic pole reversal. Sequential blocks of wood with 40 annual rings were extracted from four ancient kauri logs and dated by high precision liquid scintillation counting (HPLSC) at the University of Waikato.

Professor Alan Hogg, director of the University of Waikato Radiocarbon Dating Laboratory, said the technique provides the highest possible accuracy for samples of this age.

The kauri radiocarbon data was charted alongside annual tree ring growth data, which acts as an accurate, internal timestamp.

While scientists already knew the magnetic poles temporarily flipped around 41-42,000 years ago, they didn’t know exactly how it impacted life on Earth – if at all. But the researchers were able to detail how Earth’s atmosphere changed over this time via the kauri tree ring radiocarbon data and other data aligned to it.

“The kauri trees are helping us tie together records of environmental change in caves, ice cores and peat bogs around the world,” Co-lead Professor Alan Cooper from the South Australian Museum said. 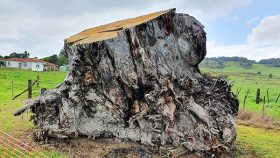 The trunk of an ancient kauri tree from Ngāwhā, in Northland. Photo / Nelson Parker.

They used the newly-created kauri radiocarbon timescale and other records from sites across the Pacific with global climate modelling to tie large shifts in major wind belts, tropical climate and glacier activity back to the Adams Event.

One of their first clues was that megafauna across mainland Australia and Tasmania went through simultaneous extinctions 42,000 years ago.

The paper suggests that the Adams Event could explain a lot of other evolutionary mysteries, like the extinction of Neandertals and the sudden widespread appearance of figurative art in caves around the world.

“It’s the most surprising and important discovery I’ve ever been involved in,” Cooper said.

The magnetic north pole doesn’t have a fixed location. It usually wobbles close to the North Pole (the northern-most point of Earth’s axis) over time due to dynamic movements within the Earth’s core, just like the magnetic south pole.

Sometimes, for reasons that aren’t clear, the magnetic pole movements are drastic.
Around 41,000-42,000 years the north and south pole swapped places entirely.