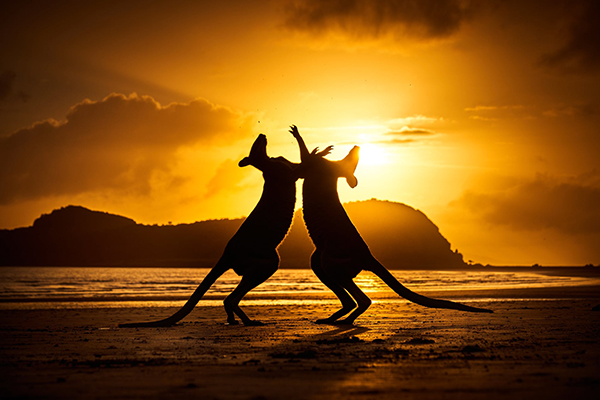 Dance at Dawn by Michael Eastwell, taken at Cape Hillsborough in Queensland. ‘I visited the area for three consecutive sunrises, but it was on my final morning that I captured this beautiful spectacle, two wallabies playing on the beach as the sun burst through the surrounding clouds,’ Eastwell says.

Australian Geographic nature photographer of the year 2021 – in pictures, The Guardian, 27 August 2021

A leafy seadragon, a flock of galahs, and ‘ghostly’ mushrooms are among the subjects captured in some of this year’s best nature photographs.

The 2021 Australian Geographic nature photographer of the year competition is produced by the South Australian Museum. It is open to photographers from around the world for images taken in the region of Australia, New Zealand, Antarctica, and New Guinea.

An exhibition of the photographs is on at the South Australian Museum in Adelaide from 27 August to 31 October.

Portelli captured the winning photograph at Second Valley in South Australia. He says leafy seadragons hide in the thick kelp in the water to camouflage themselves from predators. At night the seadragon’s features and their delicate bodies can appear translucent. 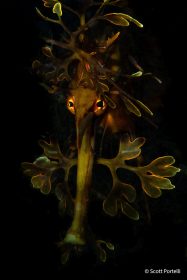 In the huge Strzelecki Desert in central Australia, a flock of galahs makes the most of the only water available at the base of this tree. Spencer came upon a rare opportunity to get a clear photograph of the birds in flight in the middle of the desert. 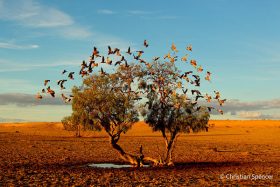 Nicknamed ‘ghost mushrooms’ because of their eerie glow, this fungi is only found in certain forests in Australia. They glow for only a few weeks in a year and are difficult to find and photograph. 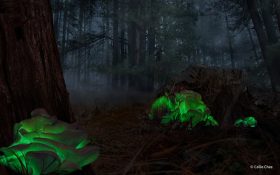 Gimesy captured the shot in Foveaux Strait off Stewart Island in New Zealand. White-capped mollymawks are a kind of albatross that mainly eat squid, fish, krill and offal from the ocean surface, and they rarely dive for food. Their largest threat is now long line and trawl fishing, especially in the seas off southern Africa.

‘A beautiful scene I came across one afternoon whilst scoping out a site for a photo shoot,’ Cannon says of the image, taken in Dalyellup in Western Australia. ‘I saw these paperbarks in the water creating stunning reflections, with some golden light emphasising the trees.’ 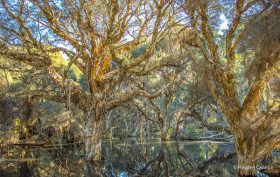 Portelli photographed this grey nurse shark in waters off Exmouth in Western Australia. Populations of grey nurse sharks along the Australian coast are under threat and have suffered a decline over recent years. The species is under threat from incidental catch from commercial fishing, recreational fishing and shark net programs in New South Wales and Queensland. 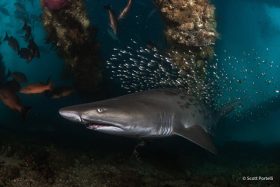 Monochrome winner: Freestone captured this image in Omeo in Victoria, looking out towards Ensay, as the 2019–20 bushfires in East Gippsland began to develop. The rising smoke cloud foreshadowed the destruction the fires would bring to the region. 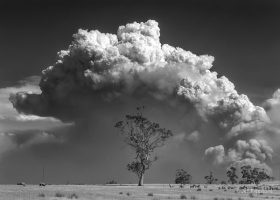 Landscape runner-up: Beneath the Surface by Ashlee Karas

‘For some, sunsets are a time for reflection and meditation,’ Karas says of the image taken at Western Australia’s Coral Bay. ‘For me, pairing a fiery sunset with the pristine coral gardens of the Ningaloo Reef under the glassy ocean surface brings a whole new level of tranquillity.’ 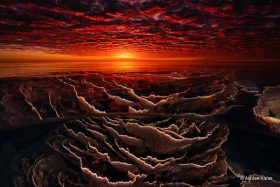 Step Into My Lair by Ben Clark

‘After photographing male peacock spiders dancing on the dunes of my local beach, I watched this scene of a less colourful female tackling a much larger flesh fly,’ Clark says. ‘It demonstrates the hunting prowess and power of these tiny jumping spiders, which reach just 5mm in length.’ Clark took this photo at Woodman Point in Western Australia. 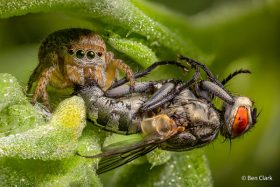 Kidd spotted the rare sight of a whale shark feeding on a large school of baitfish at Ningaloo Reef in Western Australia. ‘Whale sharks are not often documented feeding on schools of baitfish as they’re most commonly seen filter feeding,’ Kidd says. ‘This is the first time I have seen this behaviour after five years of photographing these animals on the reef.’ 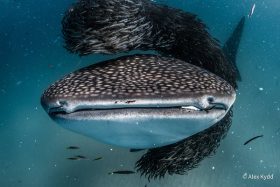 Franco Tulli‘The animal inside the seashell is a tiny octopus about two inches in diameter,’ Tulli says of the scene captured in Lembeh Strait off Indonesia.‘This kind of animal can utilise the valves as a house and for protection, taking the house with it as it moves. This shot was taken during his quiet rest.’ 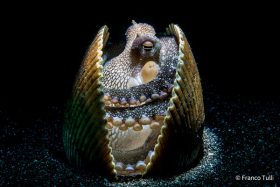 Broeke says he was in his kayak paddling upstream when he saw the osprey circling above the water at Cudgen Creek in Kingscliff, New South Wales. ‘I was so lucky to arrive just as the osprey was coming out of the water with the fish.’ 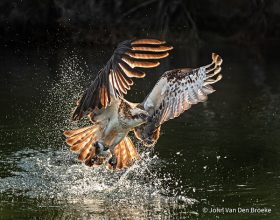