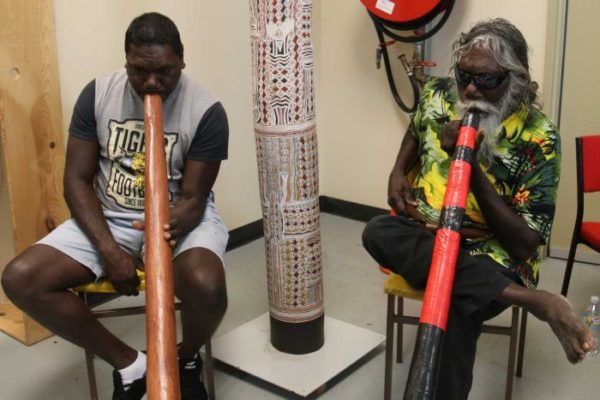 Some of Australia’s oldest and most precious didgeridoos are producing their distinctive music once again after being carefully restored by the Yolgnu people and the South Australian Museum.

The didgeridoos, which are all more than 100 years old, have been restored specifically for the Adelaide Festival exhibition Yidaki: Didgeridoo and the Sound of Australia.

Three generations of the Gurruwiwi family, including elder Yolngu Gurruwiwi, his son Larry Gurruwiwi and 11-year-old Kevin Dhurrkay came to Adelaide from the Northern Territory’s Arnhem Lands to play the instruments that have remained unheard for more than a century.

Mr Gurruwiwi hoped the exhibition would bring a new level of understanding and friendship between Aboriginal and non-Aboriginal people.

The instruments are just some of the 28,000 Aboriginal items held by the South Australian Museum’s Australian Aboriginal cultural collection.

The fragile nature of the instruments meant museum workers had to be especially careful to reintroduce moisture to the didgeridoos through a custom-built dehumidifier.

The museum’s senior collection manager, Alice Beale, said the re-humidifying process prevents any damage or warping to the instruments.