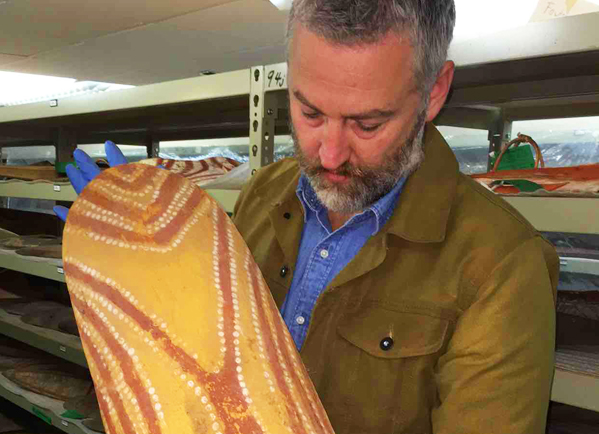 John Carty among the racks of artefacts. He says there is an urgent need to reconnect Indigenous people with ancestral objects. Photograph: Paul Daley. Source: The Guardian.

Paul Daley, Reuniting Indigenous ‘sticks’ with their stories: the museum on a mission to give back, The Guardian, 4 March 2017

John Carty stands on a platform inside a vast warehouse on Adelaide’s outskirts. On the floor below and behind him are rack after rack of shelves and drawers housing tens of thousands of Australian Indigenous artefacts.

There are about 5,000 spears and 3,000 boomerangs here, and hundreds upon hundreds of shields, thousands of pieces of decorative art and costume, and all sorts of curios – from the crayons the Adelaide tram driver-cum-ethnologist-cum-autodidact Charles Mountford encouraged the desert people to draw with, to a “pearl shell” fashioned from a buffed tin lid that was collected on the Canning stock route.

It’s the biggest single collection of Australian Indigenous material culture in the world. And much if it is here in storage for the South Australian Museum, Australia’s second oldest – and one of its most traditional – collecting institutions. Most of it will never see the light of day in exhibitions, or be displayed in the public galleries, which are already filled to bursting with other Indigenous objects.

And so these items stay in this vast aircraft hangar-like structure because of enduring empirical and colonial collection practices. That may, however, be changing quickly.

Carty, the museum’s 39-year-old head of anthropology, surveys the collection from up here, a red rag, potentially, to the museological conservatives who are content with orthodoxy.

He shakes his head and says: “These kinds of collections are utterly meaningless without Aboriginal people attached to them. Without Aboriginal voices and families and meanings, they are just pieces of wood – just sticks without stories.”

Carty aims to connect these items with the descendants of the people who made and used them. They are the living who believe ancestral spirits are incarnate in these objects, that all of this wood, animal bone, shell, stone and fibre encompasses the history of the land and the creationist animals of a past that dwarfs by tens of thousands years the comparative minutes elapsed since colonisation.

Melbourne-born Carty comes from an academic track at the University of Melbourne and the Australian National University. But he has been deep into the field, especially in the central deserts and Arnhem Land, and is admired for his knowledge of Indigenous art and material culture. He has done work for both the National Museum of Australia and the British Museum, an institution that is facing increasing acrimony and pressure over its refusal to give back some of the items in its rich Indigenous Australian collection.