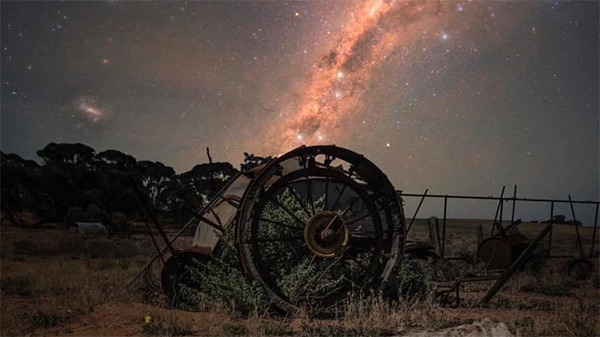 Almost 92 years ago at 10:53 on a quiet Tuesday evening, some lucky South Australians witnessed one of the rarest astronomical events in the state’s history.

It was a meteor — a huge ball of fire and rock blazing down from space.

Eyewitnesses who caught a glimpse of the sky on November 25, 1930 recalled a flaming tail following the cosmic rock, with some reporting a thunderous clap as the meteor broke the sound barrier.

Others reported a loud and heavy rumbling, making the ground shake like an earthquake and setting off a chorus of barking dogs.

Crop and sheep farmer Herbert Sanders was driving from Adelaide to his home in the small agricultural town of Karoonda when he bore witness to the rare moment in history. 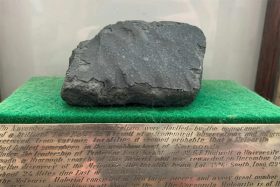 The Karoonda meteorite received international media attention due to its rare qualities and circumstances.(Supplied: District Council of Karoonda East Murray).

What makes the meteor marvel so rare is that not only was it witnessed falling from the sky — it was discovered shortly after.

“Most meteorites when they’re found maybe have been sitting in the environment for thousands of years, millions of years, but this guy fell in from space and was recovered within a couple of weeks,” Adelaide Planetarium astronomy lecturer Paul Curnow says. 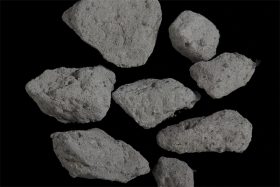 The Karoonda meteorite consists of silicates of iron and magnesium iron sulphites, and a small amount of iron-nickel alloy. (Supplied: Rodney Start/Museums Victoria).

Led by University of Adelaide Professor Kerr Grant, state government astronomer George Dodwell, and a team of students, the search party tracked down the space rock on December 9.

Named the Karoonda meteorite after its impact site, fragments of the 40-kilogram-plus rock revealed just how rare its makeup was, composed of a mixture of minerals like magnesium, iron and nickel.

“This particular meteorite is a stony type meteorite and they’re fairly rare, and what makes it even more rare is it’s a carbonaceous chondrite, so it contains carbon,” Mr Curnow says.

“They only represent about 4.6 per cent of all falls.”

Mr Curnow says astronomers believe meteors date back to the solar nebula — a rotating disk of gas and dust that created the solar system and formed the sun.

“A lot of these meteorites are older than earth itself,” he says.

“To put a price on it is very, very hard. It’s irreplaceable.” 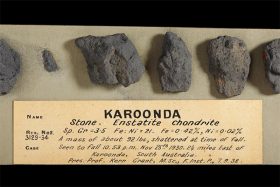 Mr Curnow says there is a roaring trade in meteorites, but in places like SA they become property of the state. (Supplied: Rodney Start/Museums Victoria).

Several fragments of the Karoonda meteorite were retrieved and went to the South Australian Museum for display, while the local council was awarded one of the largest pieces.

But after homing the fragment of history for nearly 92 years, the District Council of Karoonda East Murray has made the decision to send the valuable item to the museum for safekeeping.

Mayor Caroline Phillips says the cosmic rock has been consistently identified by auditors as a risky asset, with council insurers unable to adequately cover the fragment.

“It hasn’t been valued as such, but there’ve been a few estimates and it is quite significant in terms of its value,” she says.

To put the value of the meteorite into context, the council says even small fragments that weigh less than 1 gram can sell for around $100.

The council will retain ownership of the meteorite but it will be lent to the South Australian Museum, which will take on the care and custody of the rare item.

Ms Phillips says plans are in motion to create a replica of the rock to display in the council office for locals and tourists to marvel at, which is more than they are able to do at the moment.

“[The replica] will be on display permanently, so really putting a focus on it as opposed to having the meteorite locked away in a room because it’s so valuable,” she says. 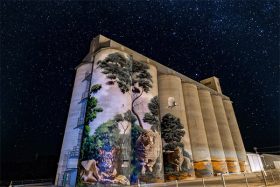 The small town of Karoonda is known for its rich farming history and having the first area school in SA. (Supplied: Kim Tanska).

Ms Phillips says the Karoonda meteorite tells a story of the region’s rich history, and she hopes it will continue to pique the interest of folks far and wide.

“These sorts of stories are what make regional communities really intriguing and enticing for visitors,” she says.

“It’s about leveraging the story of the meteorite and the other stories from our district to encourage visitors to come along and spend their money in our local businesses.

“It shapes our history — a history that we want to share with our broader community.”