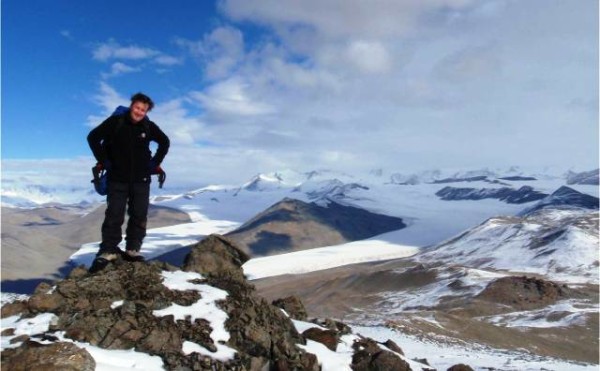 Despite temperatures dropping well below -60 °C in Antarctica, micro-animals like nematodes (commonly known as roundworms), rotifers (wheel animals) and tardigrades (water bears), can survive the most extreme environmental conditions.

These hardy and adaptable invertebrates – found in soil, ponds and lakes – are often among the first colonisers and last survivors in harsh environments.

“These animals have been living in Antarctica, likely since before it was glaciated when it had a forest,” said Associate Professor Mark Stevens, South Australian Museum.

“They are essentially relics of a continent that has had a huge amount of environmental change over a very long period of time.”

Associate Professor Mark Stevens and Dr Alejandro Velasco Castrillón from the South Australian Museum have been investigating nematodes, rotifers and tardigrades in Antarctica since 2008, using their DNA to study the animals at evolutionary and population scales.

Using the animals’ biogeography or distribution, Stevens and Velasco Castillon have been able to get a sense of the changes that have taken place on the continent, since Antarctica reached its maximum glaciation around 15 million years ago.

“From the molecular work we’ve done, in the past we can see that animals have been able to move into Antarctica.”

“From that point on, we can see from the DNA that there have been no animals moving into Antarctica, so it’s been essentially isolated for 12 million years or more,” he said.

As well as looking at animal movement over time on a continental scale, the team use DNA to see how animals have moved within the region.

While some species are widespread, others occupy on the smallest of areas.

“We can track the animal populations as they’ve moved into newly available ponds or land, through ice or glacial retreat in the last glacial maximum, or more recently, over the last 20 000 years or so,” he said.

This type of information will help managers in Antarctica protect unique habitats and populations as the movement of native species to different regions could impact on biodiversity, but more importantly provide baseline information so that invasive and/or introduced species can be detected.

To further their research, the team are preparing for an expedition to Antarctica next year, to investigate changes in biodiversity since humans began visiting Antarctica.

Thanks to a COMNAP Antarctic Research Fellowship for early career researchers, Dr Velasco Castrillón will retrace the steps of biologist James Murray, a member of Ernest Shackleton’s 1907-09 British Antarctic Expedition, to sample microscopic life in the lakes and ponds of the McMurdo Sound Region.

“100 years ago, James Murray collected the first microfauna from the region…we’ll be able to mimic his sampling methods and see how much has changed with human occupation,” said Stevens.

While no introduced animals have been recorded and established in continental Antarctica as yet, microfauna like nematodes, rotifers and tardigrades are amongst the most likely of invaders.

“If we do find an exotic species, it will be quite significant,” said Stevens.

Introduced species could disrupt the balance of the Antarctic ecosystem, either by feeding on native animals or taking their food or habitat, said Stevens.

The fellowship has helped Dr Velasco Castrillón secure a place on a New Zealand-led expedition to Antarctica in January 2016, with additional funding from Gateway Antarctica, Canterbury University and the South Australian Museum.

“Expeditions to Antarctica are incredibly expensive and scientists from many countries collaborate to make the most of their resources”, said Stevens.

Dr Ian Hawes from the Gateway Antarctica institute at Canterbury University, in New Zealand will be lending his expertise in the ecosystems of Antarctic lakes and ponds, working closely with Dr Velasco Castrillón and Associate Professor Stevens on the project.