You are here: Home » Articles filed under: 'News' » Article: 'SAM seeks changes to heritage law in sub to'

SAM seeks changes to heritage law in sub to 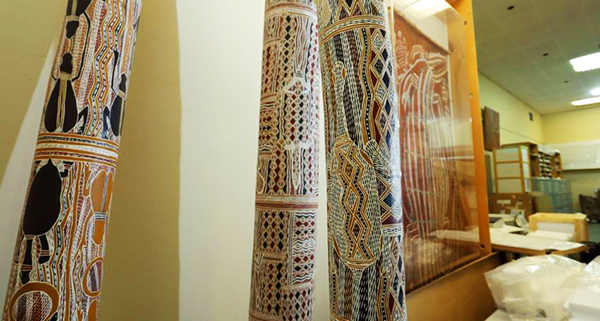 The South Australian Museum says it shouldn’t need permission from the Aboriginal Affairs Minister to take Indigenous artefacts out of the state for exhibitions, after experiencing “extraordinarily long” delays obtaining authorisation.

In a submission to a parliamentary committee, the SA Museum wrote that it often takes over six months for Premier and Aboriginal Affairs Minister Steven Marshall to grant it permission to send artefacts interstate or overseas for travelling exhibitions or loans.

The Museum, which has approximately 30,000 Aboriginal objects and 4500 remains from across Australia in its collection, wrote that the wait time was “frustrating” for Traditional Owners, museum staff, and those who seek to loan the items for interstate or overseas exhibitions.

It wants the Government to exempt it from a requirement in the Aboriginal Heritage Act that makes it mandatory to obtain Marshall’s consent before taking Aboriginal objects out of the state.

“The Museum’s experience over the last few years has exposed shortcomings in the administration of the provision,” the submission states.

“The current situation is not only frustrating for everyone involved in exhibition planning, is a poor use of government resources across the agencies and given the objects always return to the state, the value for Aboriginal communities is unclear.”

The Museum wrote that because there is “no clear timeframe” for when Marshall grants permission, its staff find it difficult to communicate with interstate Traditional Owners who request loans at very short notice or to guarantee that an object will arrive on time ahead of an exhibition opening.

The North Terrace institution wrote that as well as seeking permission from Marshall, it consults with Traditional Owners to ensure cultural protocols are respected before objects are sent away.

It said it had “stringent procedures and controls” in place to ensure artefacts are protected from loss or damage, and objects were “always returned to the state”.

“The South Australian Museum advocates a more complementary approach based on the mutual obligation to uphold the respectful relationships we have with Traditional Owners and custodians across Australia,” the submission states.

The Museum said it consulted its Aboriginal Partnership Committee and staff before sending the submission to the Aboriginal Lands Parliament Committee as part of its inquiry into Aboriginal heritage matters.

In a statement to InDaily, a government spokesperson said: “The Premier (Marshall) does not propose to give a running commentary on submissions to this inquiry”.

“When the Committee has completed its inquiry, it will provide a report which the Government will consider.”

The Museum claims to hold the biggest and one of the oldest collections of Indigenous Australian cultural material in the world, with pieces sourced from across Australia’s approximately 250 Aboriginal language groups.

The bulk of the collection was gathered during the 19th century – the SA Museum just the second institution of its kind in Australia when it was founded in 1856 – and later between the 1920s and 1970s, when a concerted effort was made by Adelaide anthropologists to start recording and collecting Australian Indigenous culture, spurred by fear it was slowly dying.

The State Government is currently planning to build an $86.5 million new storage facility to house artefacts from the Museum, Art Gallery of SA, and State Library’s collections.

It was prompted by concerns that the bulk of the Museum’s Aboriginal artefact collection is stored in a leaky storage shed in Netley, where items are at risk of irreparable water damage.