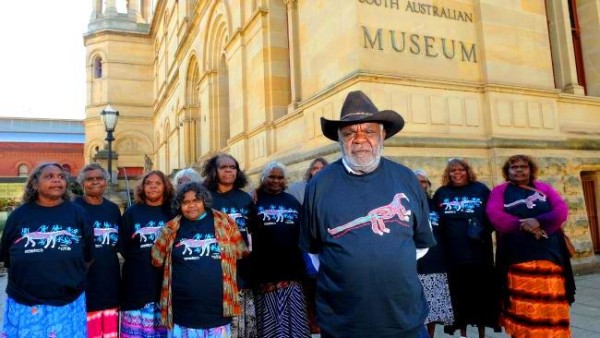 Rebecca Puddy, APY battle over songline exhibition back in court, The Australian, 14 December 2015

A dispute over the right of an arts organisation to hold an exhibition and publish a book depicting an Aboriginal songline will continue in the South Australian Supreme Court today, amid claims the arts group used items that were not part of traditional culture, including a dance made up for tourists.

The battle between a small group of Aboriginal elders and ­Ananguku Arts and Culture Corporation erupted in March last year when senior men from the ­Anangu Pitjantjatjara Yankunytjatjara Lands objected to use of the songline outside their camps.

The men are seeking a permanent injunction against the display of materials included in the book, plus compensation and legal costs.

In documents lodged with the Supreme Court, the men claim the exhibition and book are misleading as they include dances, stories and paintings as part of the songline when some were not even part of traditional Aboriginal culture.

In one instance, the men argue the arts group incorrectly used a photograph to depict women performing a dance of the creation story.

“The women dancing are not performing a dance of the creation story,” their claim says, but a “dance created for tourists”.

The government-funded exhibition opened at the South Australian Museum in March last year, with more than 50 Anangu from the APY Lands attending the ­Adelaide opening night in support of the arts organisation.

The arts organisation has previously argued there were 25 region­al and community meetings held since 2009 for the show, with ­approval first granted by the APY Council in 1996.

Positions Vacant » View All
» Contemp Progs Producer, Lifelong Learning – NMA
» Assistant Curator Territory History – MAGNT
Latest News » View All
Powerhouse’s 5 new exhibitions
Eucalyptusdom to Electric Keys Read more.
10 new art museums
Opening globally in 2022 Read more.
“Activating Smithsonian Open Access”
- new models for interacting with collns Read more.
Outback Museum of Australia, Charleville
$8.34M through in Building Better Regions Read more.
British museums face long Covid’s effects
visitation halves from pre-pandemic levels Read more.
Top +
Council of Australasian Museum Directors, c/o Ms Daryl Karp, Museum of Australian Democracy at Old Parliament House PO Box 3934 Manuka, Australian Capital Territory 2603 Australia, © CAMD 2021
Copyright: All information and resources provided on this website remain the copyright of the Council of Australasian Museum Directors. Permission is granted for viewing and downloading for personal and not for profit purposes. Those wishing to reproduce any materials for commercial, educational or other uses are requested to contact us.
Disclaimer: The content of this website is provided for information purposes only and is not intended as a substitute for professional advice. No claim is made as to the accuracy or authenticity of the content of the website. The Council of Australasian Museum Directors does not accept any liability to any person for the information or advice (or the use of such information or advice) which is provided on this website. The information on our website is provided on the basis that all persons accessing the site undertake responsibility for assessing the relevance and accuracy of its content. No responsibility is taken for any information or services which may appear on any linked web sites. Hostgator.
.