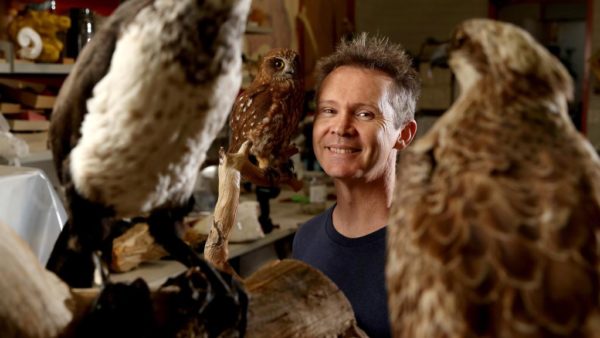 Penny Debelle, SA Museum taxidermist Jo Bain wants to pass on his unusual set of skills to a new generation, The Advertiser, 30 March 2017

WANTED: a young artist who is good with their hands, loves animals and is keen to learn the ancient art of taxidermy.

South Australian Museum taxidermist Jo Bain, 52, who has been at the museum since he was a teenager, wants to pass on his unusual set of skills to a new generation.

Until recently there was no money for an apprentice, but a philanthropist has offered to help fund a position that will soon be advertised.

“We have a benefactor who is minded to help us but we will be looking for other funds to support this very important, very unusual apprenticeship,” Museum director Brian Oldman said.

Although taxidermy, or animal preservation, is fundamental to any museum’s work, it is dying out as a calling. Only a few dedicated practitioners are left in Australia. Mr Bain’s workshop in the basement of the Museum is an intriguing place, dotted with birds — including an owl with beautiful brown eyes which is the first creature he stuffed — a dingo, fish and various reptiles frozen in lifelike poses.

Mr Bain’s biggest challenge will be the taxidermy of Alexander the greater flamingo, the oldest known flamingo in the world who died at Adelaide Zoo in 2014, aged more than 83. He is practising on ibises to finetune his technique.

“He has the most character-ridden face of any bird I have ever seen,” Mr Bain says. “One of the problems when you mount birds, if they’ve got skin on their face that is flattened and becomes like a mask. You lose all the texture and you lose all the character of the bird.”

Mr Oldman said the ideal apprentice would have artistic skills, manual dexterity and be able to transform an idea into 3D form.

“I think you need to have an innate passion for the subject and a sharp eye for detail,” he said.

One of Mr Bain’s most prominent successes is a five-metre great white shark, the biggest ever recorded, that hangs suspended from the ceiling in the Museum’s main entrance

“It is through the skill of an amazingly talented individual like Jo that we are able to communicate the amazing stories that we do to our visitors,” Mr Oldman said. The position will be advertised in the next few weeks.
Positions Vacant » View All
» Exhibition Technician – Canterbury Museum
» Marketing and Campaigns Officer – WAM
Latest News » View All
Nadine Dorries 10th Culture Sec since 2010
“to fight the woke warriors at culture” Read more.
What place for public statues in the history of art?
Neil McGregor on value of retaining statues Read more.
Statues in the context of art sculpture
- modelling, animation & so much life Read more.
AHRC explores digital future of UK cultural
& heritage – links to Collecting the West Read more.
Aus research policy env “a slow tragedy
unfolding” business R&D 0.9% - 50% OECD av Read more.
Top +
Council of Australasian Museum Directors, c/o Ms Daryl Karp, Museum of Australian Democracy at Old Parliament House PO Box 3934 Manuka, Australian Capital Territory 2603 Australia, © CAMD 2021
Copyright: All information and resources provided on this website remain the copyright of the Council of Australasian Museum Directors. Permission is granted for viewing and downloading for personal and not for profit purposes. Those wishing to reproduce any materials for commercial, educational or other uses are requested to contact us.
Disclaimer: The content of this website is provided for information purposes only and is not intended as a substitute for professional advice. No claim is made as to the accuracy or authenticity of the content of the website. The Council of Australasian Museum Directors does not accept any liability to any person for the information or advice (or the use of such information or advice) which is provided on this website. The information on our website is provided on the basis that all persons accessing the site undertake responsibility for assessing the relevance and accuracy of its content. No responsibility is taken for any information or services which may appear on any linked web sites. Hostgator.
.