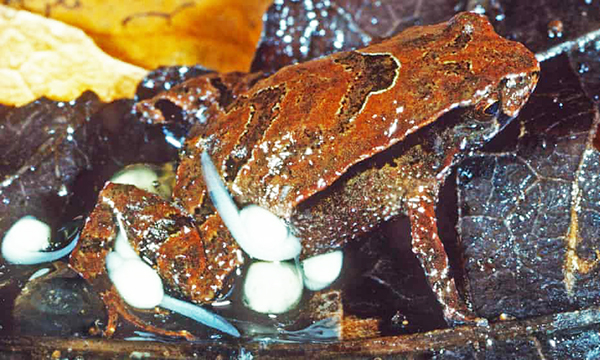 Assa wollumbin found in Wollumbin National Park and will likely be listed as critically endangered.

A new frog species, one of only two in Australia known to carry its tadpoles on its body, has been discovered in the Gondwana rainforests world heritage area in northern New South Wales.

The tiny frog measures 16mm and is found on one mountain in the Wollumbin national park.

Researchers from the University of Newcastle and the South Australian Museum used genetic analysis to identify the frog as a distinct species from its close relative Assa darlingtoni.

The frogs are commonly referred to as pouched or hip pocket frogs, or sometimes the marsupial frog.

The male frogs carry developing tadpoles in pouches on their sides of their bodies before little frogs emerge two to three months later.

“The hip pocket frog is not only unique for its amazing breeding biology among Australian frogs, but it is also unique among frogs of the world,” said the University of Newcastle’s Michael Mahony, one of the researchers who discovered the frog.

“There are only four of the 4,000 species worldwide that have male parental care where the male carries its developing tadpoles.”

The tiny frog population is confined to an area of about 2,000 hectares on Wollumbin mountain.

The frog is one of three new Australian species the researchers have described in the past year.

Mahony said it was discovered while they were examining frogs from five isolated areas from south-east Queensland to Dorrigo in northern NSW where pouched frogs were known to occur.

Genetic tests showed the Wollumbin population was a unique species.

The newly described pouched frog is one of nine threatened species of frog the researchers are studying in the aftermath of the 2019-20 bushfire disaster.

The NSW environment minister, Matt Kean, said the new species had been named Assa wollumbin in consultation with Elders of the Wollumbin Consultative Group.

He said the government had declared its habitat an asset of intergenerational significance, a designation that was introduced after the 2019-20 bushfires for places that warrant special protection.

The species is expected to meet the state’s criteria for a critically endangered listing.

“The small population size makes this frog more vulnerable to the impacts of climate change, which is why the NSW government moved quickly to protect its habitat within days of being formally described,” Kean said.

“A conservation action plan will be developed to ensure the survival of this fascinating frog species, which has been living undiscovered high in the cool forest.”