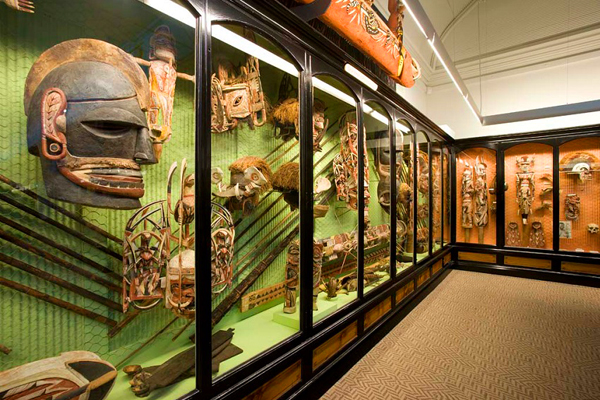 Stephen Zagala, World cultures and the Western Pacific at the South Australian Museum, The Adelaide Review, 17 May 2018

The South Australian Museum recently signalled an important shift in its approach to human creativity and endeavour, renaming its ‘Foreign Ethnography Collection’ as the ‘World Cultures Collection’.

Turning away from the colonial notion that a museum looks at human cultures through an ethnographic lens, the South Australian Museum now aims to think about human cultures as part of a global ecology in which we all participate.

Since starting my World Cultures Fellowship at the South Australian Museum in March, I’ve made a practice of walking through the Pacific Gallery almost every day. With around 3000 objects on exhibit, it is reputed to be one of the most expansive displays of Pacific material to be found anywhere in the world. This reputation is well deserved. I’m endlessly fascinated by the richness of detail and the rare treasures that the Pacific Gallery contains. And I’ll continue to make it part of my daily routine because every visit rewards me with new surprises and insights.

The South Australian Museum’s Pacific Gallery is also remarkable for the way that it captures a distinctly Australian perspective on the Pacific region.

For many people, ‘The Pacific’ is a foggy geographical concept. It describes an expanse of ocean that covers almost a third of the planet’s surface area; a watery realm sparsely populated by culturally diverse groups of people. It’s a geographic generalisation, to say the least. In some respects it makes more sense to think of the Pacific as a purely imaginary place; a geo-political screen onto which partial histories and possible futures have been projected from different points of the globe.

From a North American perspective, for example, the Pacific tends to refer to Hawaii and the Micronesian territories north of the equator, across which the United States’ political relationships with Japan, Vietnam, Korea and China have been played out. For New Zealanders, the Pacific is primarily about the clusters of Polynesian islands that stepped out paths of migration to Aotearoa some 700 years ago, and which continue to share close cultural links with the contemporary Pacific Islander communities that have resettled in New Zealand. From a European perspective, the Pacific is the oceanic flipside of the planet; a vast antipodean realm that includes the islands of Australia and New Zealand.

Australia’s perspective on the Pacific, however, has always primarily focused on the western Pacific; on the Melanesian cultures of New Caledonia, Fiji, Vanuatu, Solomon Islands, Bougainville, Papua New Guinea, and West Papua. It is in this zone of the western Pacific that Australia has exercised governance, ‘recruited’ labourers, fought wars, engaged in business and embarked on missionary and aid projects. And it continues to be a region in which Australia pursues a wide range of interests from ecotourism to the detention of unwanted immigrants.

The depth of Australia’s distinctive and unique relationship with the western Pacific is what the South Australian Museum reflects with unparalleled cogency. The World Cultures Collection began with a deposit of Fijian material by a South Australian Member of Parliament in 1860. And, over the last 150 years, this collection has been continually built on by Australians exploring and working in Melanesia. What I find literally awesome about the Pacific Gallery is the diversity of cultural practices it contains, and how these practices express the inventive, entrepreneurial, adventurous spirit that subtends the peopling of the Pacific.