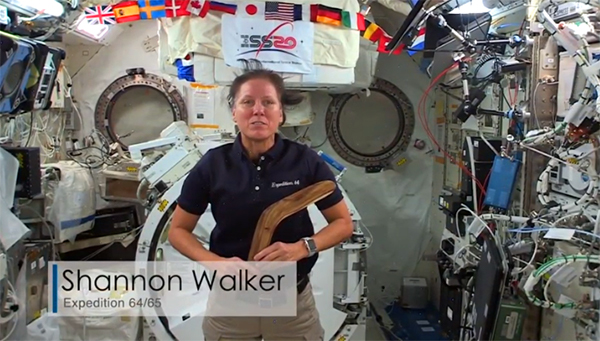 A boomerang created by local Kaurna man, Jack Buckskin, has made its way into space on-board a NASA operated Tesla Falcon 9 rocket in the presence of US astronaut, Dr Shannon Walker, the wife of Adelaide’s very own astronaut, Dr Andy Thomas.

Commissioned by the South Australian Museum as an expression of modern Aboriginal culture and ingenuity, the boomerang was handed to Premier Steven Marshall at a ceremony late last year and sent to Dr Walker in time for NASA’s SpaceX Crew-1 mission.

“In sending this great example of Aboriginal engineering and aerodynamics into space, we honour our Aboriginal culture while symbolising our ambitious, optimistic nature and the new industries being developed in South Australia,” Premier Marshall said.

“I’d like to offer my sincere thanks and congratulations to Jack for creating this beautiful piece for us, which is putting both Jack and South Australia on the intergalactic stage,”

“I’d also like to say a special thank you to Dr Walker for taking this piece of South Australia with her and wish her a wonderful, safe mission.”

Minister for Trade and Investment Stephen Patterson said the opportunity to include a piece of South Australia on the space mission, further highlights the importance the state places on this emerging sector.

“With the national Space Agency here in Adelaide and the growing opportunities for companies within the space sector, it’s great to see a piece of our Aboriginal artistry make its way out of our atmosphere,” Minister Patterson said.

“South Australia’s relationship with space continues to evolve, and hopefully in the not-too-distant future we’ll be able to launch other South Australian items to space in rockets from our state as more space companies invest here.”

The boomerang has been carved out of Western Myall wood (Acacia Papyrocarpa) by Jack Buckskin who was excited to hear that it had made it into space.

“I’ve been very lucky to have Aboriginal items, such as shields, in places around the world like Austria and India which I thought was an awesome experience, but to have something up in space which is untouched territory is beyond words,” Jack Buckskin said.

“We talk about connections with Aboriginal people, we talk about land, sea and sky but I don’t think space is a part of that sky world that we’re talking about. It’s pretty crazy that something that has been handmade down here is up in the reality of the sky world with our Aboriginal ancestors from that part of our culture.”

“Our Patron, Dr Andy Thomas, was accompanied by a returning boomerang from the museum’s collection on his mission aboard Space Shuttle Endeavour in 1996,” Brian Oldman, Director of the South Australian Museum said.

“It’s incredibly significant to see Dr Shannon Walker now take an example of modern Aboriginal culture into space. We send our thanks to Jack Buckskin for carving this extraordinary boomerang and wish Dr Walker well for her mission.”

Upon its return from space, the boomerang will be displayed at the Space Recovery Centre on Kaurna land as an iconic South Australian story for the public to enjoy before joining thousands of other space travelled items at the new Aboriginal Art and Culture Centre at Lot Fourteen, once established.

To view the boomerang in space, follow this link: https://youtu.be/OywIeGXhPFw