February 5th, 2021 | Browse other: News. | Tagged with: Half of South Australia’s 46 Aboriginal languages are at risk of being lost forever, South Australia Museum, Waking up SA’s ‘dormant’ Indigenous languages | 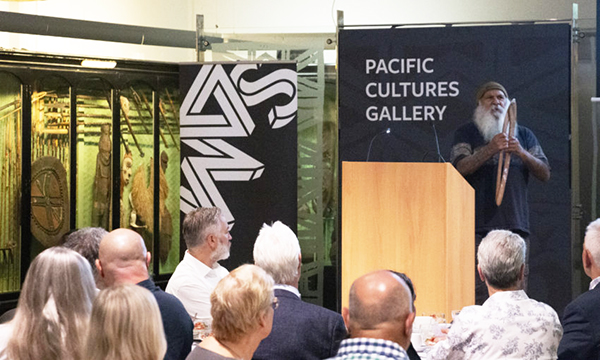 Half of South Australia’s 46 Aboriginal languages are at risk of being lost forever, but a one-year pilot program run with support from State Government, South Australia Museum and the University of Adelaide aims to change that.

A report published last year by South Australia’s Aboriginal Lands Parliamentary Standing Committee found 23 of the state’s 46 Aboriginal languages are considered dormant, meaning they are no longer spoken and “may not even be remembered”.

The website will go live in June and focus initially on one dormant language from the Ngarrindjeri region in the state’s South East, called Tanganekald.

It is hoped the website will be used by individuals, schools and the broader community. It will draw upon SA Museum’s archival material, including handwritten index cards recorded in the 1930s by Aboriginal man Milerum (aka Clarence Long) and anthropologist Norman Tindale.

SA-born Narungga, Ngarrindjeri and Kaurna man Michael O’Loughlin is a great-grandson of Milerum and an ambassador for the project ambassador.

At the launch event for the portal, Michael said, via a recorded video from Sydney, “the revitalisation of our language is so important.

“I hope that by learning and digitising our language, we will help our younger generation become more familiar with our old ways, and connect and build power through your culture.”

Premier Steven Marshall, who also looks after the Aboriginal Affairs and Reconciliation portfolio, said he believes the project will be extended beyond the intended one-year timeframe.

“Through hardships suffered over these generations, the languages have suffered. Many are in a fragile state and not spoken today,” the Premier said.

“The longer we wait, the harder it’s going to become to recover and maintain these very important languages.

“I know it says pilot, but I just think it’s a pilot for a year with expansion thereafter.”

SA Museum director Brian Oldman tells CityMag the program received $200,000 State Government funding to set up the website and allow a team of linguists from the University of Adelaide’s Mobile Language Team can use the Museum’s and wider community’s resources effectively.

“This is the 21st century,” Brian says, “and we go beyond what the anthropologists did 100 years ago and the world has moved on. It’s really harnessing those capabilities so that we can do more – and we can do better.”

Brian says the Premier came to him in January last year with the concept, and the project was signed-off in June 2020.

When CityMag asks why the project’s launch party was held at the SA Museum, located in metropolitan Adelaide – the traditional lands of the Kaurna people – instead of the Ngarrindjeri region, where Tanganekald was once spoken, Brian says “people who are descendants who are speakers don’t necessarily live on country.”

Paul Monaghan is a senior linguist and manager of the University of Adelaide’s Mobile Language Team, which for decades has helped communities maintain and preserve cultural heritage and language material.

He says the MLT was invited to be a part of the project from the very beginning, and its success will be measured by “Tanganekald people speaking Tanganekald words”.

Arabana and Narungga woman Lakota Milera-Weetra has been a paid trainee with the MLT for over two years. She tells CityMag that while she’s been trying to learn the Arabana language for four years, the lack of local speakers has presented a problem.

“We’ve only got nine speakers, nine or 10 speakers left of Arabana, and they’re really dispersed around Australia, so they’re not really together in a community where we can actually go and have immersion,” Lakota says.

Though she sees the existence of the online portal as a positive step, Lakota is concerned about the “rushed” one-year timeline, and she says she prefers face-to-face and over-the-phone communication.

“I think you need to really give it the time and the patience that it deserves,” Lakota says.