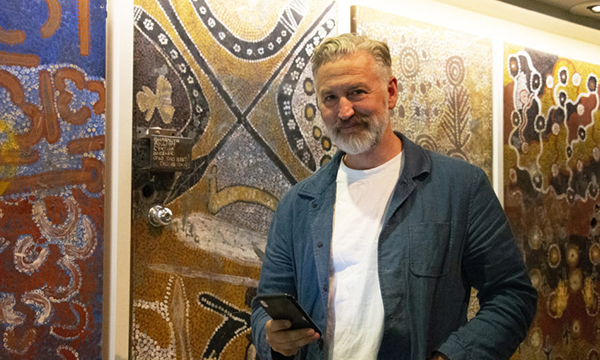 WARNING: Aboriginal and Torres Strait Islander readers are warned this story contains images of deceased persons.
On 26 January, the Australian public holiday increasingly known as Survival Day, he posted a picture of the Uluru Statement from the Heart.

SA Museum Head of Humanities John Carty has a strong Instagram follow-to-follow ratio and counts the Premier as a fan. He says he uses the platform to share “hard” but “important” Indigenous stories from within the institution.

John Carty’s Instagram grid is a wash of brown, red and black colours.

The Head of Humanities at SA Museum regularly posts snapshots of Aboriginal Australian stories condensed to 100 words or less.

On 26 January, the Australian public holiday increasingly known as Survival Day, he posted a picture of the Uluru Statement from the Heart.

Roughly six lines described where users can learn more about the document, which was authored by 250 Aboriginal delegates in 2017 and, amongst other things, requests from the Federal Government sovereignty, constitutional reform and a voice to parliament.

“The Uluru Statement from the Heart was not addressed to politicians, it was addressed to all of us,” the post says.

“If you haven’t fulfilled your part of that, today is surely the day. Take four minutes out of January 26 to listen to Megan David reading the statement.”

John joined Instagram in 2015, which is also the year he started his role with the South Australian Museum.

As Head of Humanities at the 150-year-old institution nestled on North Terrace, a large portion of John’s job involves repatriating thousands of bones belonging to Indigenous people stored on the museum’s shelves.

“My job is to do all the repatriation with Aboriginal communities and I think those communities now want the public to know what they’re dealing with,” John explains.

“They want the public to know that their ancestors are sitting on shelves in museums and universities around the world, and they’d like them to be back in country. And we want that too, but it’s not something that most people grow up knowing.”

Despite working with such controversial material, it’s not part of John’s job to have an opinion. That’s especially the case when producing content on social media.

“I’m a public servant,” John says, “and there’s a code of conduct around social media.

“I got handed [the code of conduct] a little bit after I launched my profile, but I probably ride the line of what’s possible and what’s appropriate on Instagram. But I don’t think there’s anything I’ve censored myself on in terms of thinking of a story that I wouldn’t tell.”

CityMag has noticed John’s Instagram following is predominantly younger (meaning early to mid-20s), and we’re curious about what the anthropologist has done so well to capture their attention.

He believes it’s because young people crave honesty rather than spin.

“We want to be able to say something with integrity and I think in this particular space where there’s been so much silence in Australia – and so much political silence – for someone to just say ‘This happened; this matters’ is probably really refreshing,” John says.

“That’s particularly so for a generation now… who are ready.”

A 2019 survey by the Social Research Centre of just over 2000 people showed support for 26 January as the “best day” for a national celebration increased with age: 73 per cent of Gen Xers (aged 39—53) supported Australia Day on that day, compared with 58 per cent of Millennials (24—38) and 47 per cent amongst Gen Z (23 and younger) .

A larger, albeit less scientific, survey of Triple J listeners in 2017 showed 60 per cent of the 65,000 voters supported moving the youth broadcasters annual Hottest 100 countdown away from 26 January.

The “political silence” John is referring to, and what young Australians seem to be increasingly aware of, is regarding Australia’s colonial history, he says, “and recognising the ongoing pain for our Aboriginal brothers and sisters.”

John is buoyed by the engagement he sees amongst younger people and his social media followers, including his “number one ticket-holder”, Premier Steven Marshall.

“The Premier is really passionate about Aboriginal culture,” John says.

We ask John whether he’d like Prime Minister Scott Morrison to follow him, and he replies, jokingly, “I think the question is why doesn’t ScoMo follow me already?” 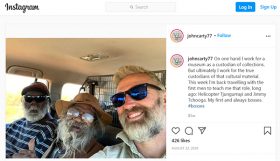 But the audience he has already garnered is ideal. He believes young people are core to social change and are able to influence their elders.

“This is a way of building an audience that’s ready for those conversations as well,” John says.

“You’re talking about your generation, your friends, or people you wouldn’t necessarily expect to be following a museum guy, but they’re hungry for it.

“They’re hungry for some truth and integrity about the difficult stuff.”