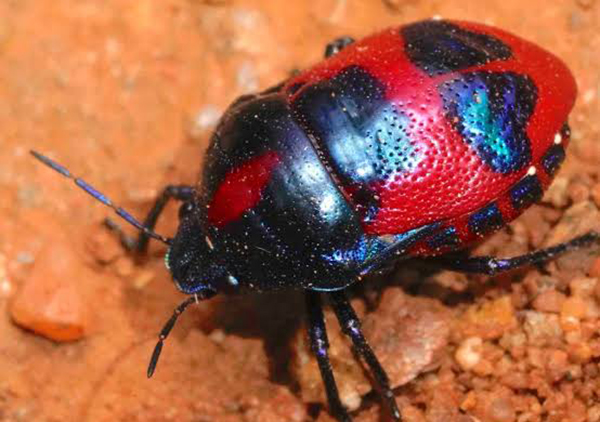 Mike Lee, Australia’s bushfires could drive more than 700 animal species to extinction. Check the numbers for yourself, The Conversation, 14 January 2020

The scale and speed of the current bushfire crisis has caught many people off-guard, including biodiversity scientists. People are scrambling to estimate the long-term effects. It is certain that many animal species will be pushed to the brink of extinction, but how many?

A far greater number of smaller creatures such as insects, snails and worms will also be imperilled. They make up the bulk of biodiversity and are the little rivets holding ecosystems together.

But we have scant data on how many species of small creatures have been wiped out in the fires, and detailed surveys comparing populations before and after the fires will not be forthcoming. So how can we come to grips with this silent catastrophe? 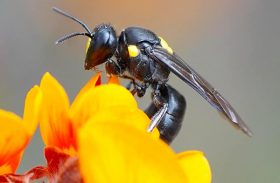 This native bee (Amphylaeus morosus) has been devastated by the bushfires across much of its range. It plays important roles in pollinating plants and as part of the food web, but has no common name, and its plight is so far unheralded. Reiner Richter https://www.ala.org.au/

Using the information that is available, I calculate that at least 700 animal species have had their populations decimated – and that’s only counting the insects.

This may sound like an implausibly large figure, but the calculation is a simple one. I’ll explain it below, and show you how to make your own extinction estimate with only a few clicks of a calculator.

More than three-quarters of the known animal species on Earth are insects. To get a handle on the true extent of animal extinctions, insects are a good place to start.

My estimate that 700 insect species are at critical risk involves extrapolating from the information we have about the catastrophic effect of the fires on mammals.

We can work this out using only two numbers: A, how many mammal species are being pushed towards extinction, and B, how many insect species there are for each mammal species.

To get a “best case” estimate, I use the most conservative estimates for A and B below, but jot down your own numbers.

How many mammals are critically affected?

A recent Time article lists four mammal species that will be severely impacted: the long-footed potoroo, the greater glider, the Kangaroo Island dunnart, and the black-tailed dusky antechinus. The eventual number could be much greater (e.g the Hastings River mouse, the silver-headed antechinus), but let’s use this most optimistic (lowest) figure (A = 4).

Make your own estimate of this number A. How many mammal species do you think would be pushed close to extinction by these bushfires?

We can expect that for every mammal species that is severely affected there will be a huge number of insect species that suffer a similar fate. To estimate exactly how many, we need an idea of insect biodiversity, relative to mammals.

How many insect species are out there, for each mammal species?

The world has around 1 million named insect species, and around 5,400 species of land mammals.

So there are at least 185 insect species for every single land mammal species (B = 185). If the current bushfires have burnt enough habitat to devastate 4 mammal species, they have probably taken out around 185 × 4 = 740 insect species in total. Along with many species of other invertebrates such as spiders, snails, and worms. 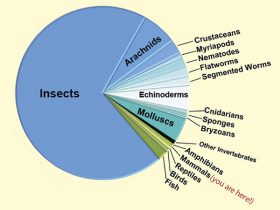 There are hundreds of insect species for every mammal species. https://imgbin.com/

For your own value for B, use your preferred estimate for the number of insect species on earth and divide it by 5,400 (the number of land mammal species).

One recent study suggests there are at least 5.5 million species of insects, giving a value of B of around 1,000. But there is reason to suspect the real number could be much greater.

How do our estimates compare?

My “best case” values of A = 4 and B = 185 indicate at least 740 insect species alone are being imperilled by the bushfires. The total number of animal species impacted is obviously much bigger than insects alone.

Feel free to perform your own calculations. Derive your values for A and B as above. Your estimate for the number of insect species at grave risk of extinction is simply A × B.

Post your estimate and your values for A and B please (and how you got those numbers if you wish) in the Comments section and compare with others. We can then see what the wisdom of the crowd tells us about the likely number of affected species.

Why simplistic models can still be very useful

The above calculations are a hasty estimate of the magnitude of the current biodiversity crisis, done on the fly (figuratively and literally). Technically speaking, we are using mammals as surrogates or proxies for insects.

To improve these estimates in the near future, we can try to get more exact and realistic estimates of A and B.

Additionally, the model itself is very simplistic and can be refined. For example, if the average insect is more susceptible to fire than the average mammal, our extinction estimates need to be revised upwards.

Also, there might be an unusually high (or low) ratio of insect species compared to mammal species in fire-affected regions. Our model assumes these areas have the global average – whatever that value is!

And most obviously, we need to consider terrestrial life apart from insects – land snails, spiders, worms, and plants too – and add their numbers in our extinction tally.

Nevertheless, even though we know this model gives a huge underestimate, we can still use it to get an absolute lower limit on the magnitude of the unfolding biodiversity crisis.

This “best case” is still very sad. There is a strong argument that these unprecedented bushfires could cause one of biggest extinction events in the modern era. And these infernos will burn for a while longer yet.