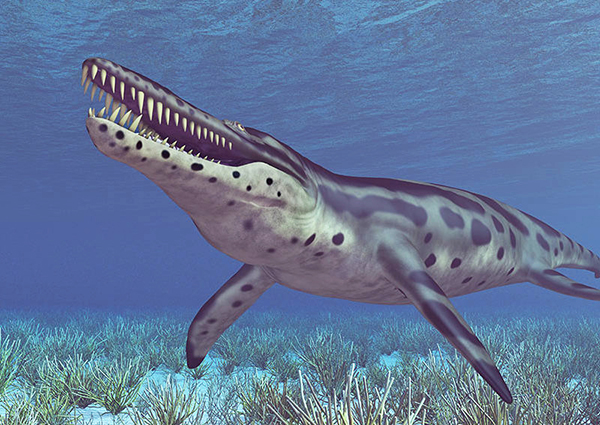 Christopher Sanders, The tooth of the matter, The Adelaide Review, 20 June 2019

The only identified opalised tooth of a kronsuarus, known as the T. rex of the ocean, is currently on display at the South Australian Museum. The museum’s senior collection manager of earth sciences, Ben McHenry, describes the importance of this 110-million-year-old gem.

What is the significance of this 110-million-year-old opalised tooth?

It is the only known opalised tooth from the apex marine predator of the Australian Early Cretaceous (110 MY) – Kronosaurus queenslandicus. It is the only tooth of Kronosaurus known from South Australia. The first remains of Kronosaurus were found at Hughendon in north Queensland in 1899 but not described until the 1920s. An almost complete skeleton was collected by a Harvard University team in the early 1930s and now holds pride of place on display at their Museum of Comparative Zoology.

The tooth was discovered by Sophia and John Provatidis in the 80s. When did you become aware of it and how long have you wanted it to be part of the Museum’s display?

We became aware of this tooth way back in the early 2000s when we were designing our opal fossil gallery at the Museum. John and Sophia were generously loaning us material from their collection for the display and we discovered it in pieces amongst their specimens. I have lusted after it ever since then! It is certainly one of the jewels in the crown of South Australian opal fossils. It is incredibly rare, visually impressive and has a good flash of colour. Ever since then, whenever I have met John and Sophia, I have discussed how we could acquire it. Over the ensuing years, they have been interested to sell it to us but we just didn’t have the money they were asking. I had suggested several times they might consider donating it to us under the federal government’s Cultural Gifts Program. They certainly wanted the tooth to stay in South Australia, so you can imagine my joy when last year Sophia announced they would donate the tooth under the program.

Ha! That’s a term that I coined to describe this awesome predator. People know of Tyrannosaurus rex, certainly from movies such as Jurassic Park. It was my intention to convey the idea of this apex marine predator by comparing it to something they already know and can relate to.

What the layperson does not probably know is that it is very rare to find a whole skeleton of a fossilised animal – although there are about 50 reported discoveries of T. rex bones, we still do not have a complete skeleton, yet it is probably the most famous of all dinosaurs. This is basically because you need to have a lot of luck on your side to become fossilised. When animals die, their carcasses are scavenged or break up under water. So finding a whole animal is extremely rare.

Not so with Kronosaurus. Although the original material described in the 1920s was several bones and teeth, we have an almost complete skeleton of a single individual found by the Harvard team in the 1930s. A second species of another almost complete individual has been described from Bolivia. As such, we have a great basis for theorising on how it looked and behaved.

It had an elongated head, a short neck, with a seal-shaped body propelled by four flippers, and a relatively short tail. Kronosaurus was a carnivore with a mouth full of many long, sharp, conical teeth. Current estimates put Kronosaurus at around 10 metres in length, weighing up to 11,000 kilograms! Its skeleton shows that it must have been a fast and powerful swimmer.

The opalised Kronosaurus tooth is on display in the Opal Fossil gallery at the South Australian Museum.

The Adelaide Review is a media partner of the South Australian Museum. samuseum.sa.gov.au