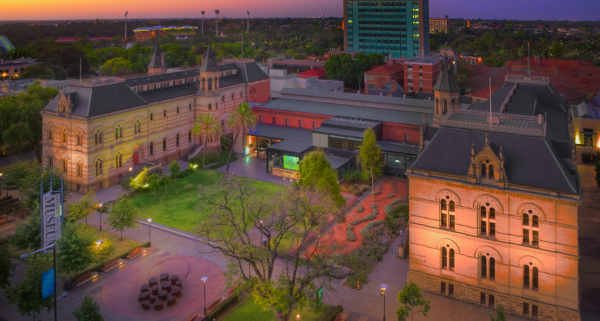 Over one million people visited or experienced exhibitions at the South Australian Museum last financial year, marking the highest annual figure in the museum’s 163-year history.

That number surpassed the estimated 730,000 visitors outlined in State Budget papers and the 824,067 visitors recorded the previous financial year.

According to the museum, the record crowds were driven by its travelling exhibition program, which last year reached 231,934 people in Australia and overseas.

A further 184,199 people engaged with the museum’s 109 public programs, 68,120 participated in offsite programs, including in remote and regional areas, while a further 116,079 contributed to the total North Terrace visitation of 759,351.

“We took our Yidaki: Didjeridu and the Sound of Australia exhibition to the Echigo Tsumari Festival in Japan, our much-loved Australian Geographic Nature Photographer of the Year exhibition to Sydney and Western Australia, and the Waterhouse Natural Science Art Prize was on in Canberra, and that’s just to name a few of our travelling exhibitions,” SA Museum director Brian Oldman said.

“There’s a real appetite to experience the Australian Aboriginal collection nationally overseas, people want to learn and hear the stories behind… these cultural materials.

“It’s an exciting road ahead as we continue to engage with more local, national and international visitors.”

InDaily reported last month that the State Government was working with museum staff to protect over 30,000 spiritually and anthropologically significant pieces in the museum’s Aboriginal cultural material collection, which is currently stored in a repurposed warehouse in Netley.

According to Oldman, the facility is prone to leaking and its fire suppression system has put cultural objects currently stored in the open at perpetual risk of damage.

The Marshall Government pledged $3 million towards protecting the collection in the short to medium term pending the establishment of a long-term storage solution, which, according to the Government’s Aboriginal Action Plan, was supposed to be determined by mid-2019.

In a statement to InDaily, a government spokesperson said a long-term storage solution was being considered as part of planning for the mooted Aboriginal Art and Cultures Gallery at the old Royal Adelaide Hospital site.

“In the meantime, a professional services contractor has been engaged to design the upgrade of the Netley storage facility,” the spokesperson said.

“The project will include the construction of fit-out works including collection viewing rooms and upgrades to air conditioning and fire suppression and the installation of appropriate shelving, racking and cabinetry.”

Oldman said the museum was “excited” to be working with the State Government on the development of the Aboriginal Art and Culture Gallery.

“(It) will potentially provide the museum with a new home for Australian Aboriginal culture materials currently in the museum’s custodianship – giving increased space to get more of the world-renowned collections on display,” he said.

Premier and Arts Minister Steven Marshall said the museum was a “vital part of our state’s offering to interstate and international visitors”.

“The South Australian Museum has some world-class collections and the Government is pleased to be working with the Museum to ensure more people are encourage to view them,” he said.