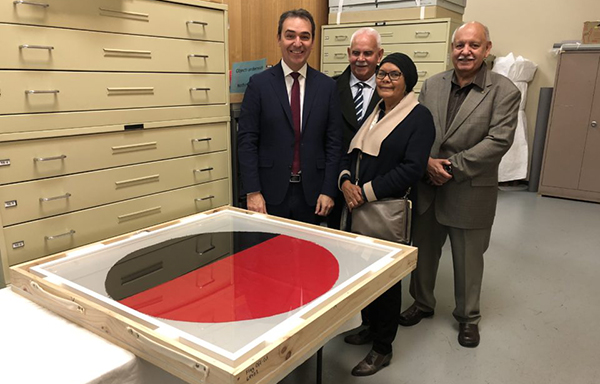 Stephanie Richards, The suburban Adelaide address that could be the nation’s most important cultural site, InDaily, 19 August 2019

In a leaky brick and aluminium warehouse in Adelaide’s western suburbs hides what has been described as one of the most culturally significant sites in Australia – and it’s a place that is perpetually under threat.

SA Museum Director Brian Oldman stands by the entrance of an old printing premises in Netley.

Surrounding him is a maze of metal racks, drawers and boxes – some draped with white sheets like forgotten attic furniture and others left exposed, their shelves tightly lined with tens of thousands of spears, boomerangs, shields and other cultural material embodying more than 60,000 years of living Aboriginal culture.

“What you have in this room is, in effect, the essence, the distillation, the summation of Aboriginal Australian culture,” Oldman says, motioning towards the rows of priceless artefacts before him.

“There is nowhere in the world that you can come into proximity with that other than here.

“Culturally, this is one of the most important places in Australia.”

The SA Museum holds the biggest and one of the oldest collections of Indigenous Australian cultural material in the world, with more than 30,000 spiritually- and anthropologically-significant pieces sourced – ethically or otherwise – from across Australia’s approximate 250 Aboriginal language groups.

The bulk of the collection was gathered during the 19th century – the SA Museum just the second institution of its kind in Australia when it was founded in 1856 – and later between the 1920s and 1970s, when a concerted effort was made by Adelaide anthropologists to start recording and collecting Australian Indigenous culture, spurred by fear it was slowly dying.

Even today the collection continues to grow, with museum staff having just finished cataloguing 150 new woven baskets as well as a plethora of contemporary Aboriginal art. 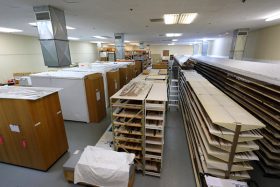 “We see ourselves very much as the custodians of the collection,” says Oldman. “The collection is really the collection of the community groups who have the cultural authority for the area for which they have their culture. “We simply look after it on their behalf.” Stored behind lock and key and only opened to visiting Aboriginal groups and the occasional non-Aboriginal visitor upon request, the collection is at a crossroad between colonialism and modern-day museum practices.

“We see ourselves very much as the custodians of the collection,” says Oldman.

“The collection is really the collection of the community groups who have the cultural authority for the area for which they have their culture.

“We simply look after it on their behalf.”

Stored behind lock and key and only opened to visiting Aboriginal groups and the occasional non-Aboriginal visitor upon request, the collection is at a crossroad between colonialism and modern-day museum practices.

There’s a remnant from the first Aboriginal flag, an Eora man’s wooden club that Lieutenant David Blackburn fashioned into a whip upon arrival in Australia on the First Fleet, and intricate contemporary Yolngu bark paintings.

Those pieces lie alongside 5000 spears, 3000 boomerangs, 500 bark paintings and drawers brimming with hundreds of intricately woven baskets, neck-pieces and sculptures, to name a few.

Only five per cent of the museum’s Aboriginal cultural material is on display – the remainder resides at Netley.

“It is incredibly humbling to be here,” Oldman says, “and I’m talking as a white European museum director.

“For people to whom these objects are at the centre of their country, their culture and their spirituality, I can only assume that’s how it would feel by a factor of 100 or 1000.

Oldman has moved to a mezzanine overlooking the 170-square metre room and its bourgeoning collection of priceless objects.

The reason for his visit is not to boast about the collection – although the superlatives to describe it come thick and fast – but to speak about the unfortunate environment in which it is stored.

Behind him are rows of womeras – wooden instruments used to propel spears or darts long distances. There are about 2000 of them, all stored in the open without protective covering.

“They shouldn’t be on open shelves, that’s not how they should be stored at all,” Oldman says, shaking his head.

“Ideally, these should be contained in some way.”

The SA Museum’s team of collection managers have been fighting an uphill battle against the elements, which have quite literally leaked into the Netley building and risked damaging their collection beyond repair.

The problem lies not just with the building – which is prone to flooding and humidity when it rains – but a succession of governments that have failed to find the items a permanent home.

“We have had in the past multiple ingresses of water – rain events – and we’ve had water sheeting down walls,” says Oldman, motioning towards now-bare walls that once hung acrylic paintings.

“The collection is in totally unsuitable circumstances and that’s placing it at risk.”