You are here: Home » Articles filed under: 'News' » Article: 'SAM’s world of discovery' 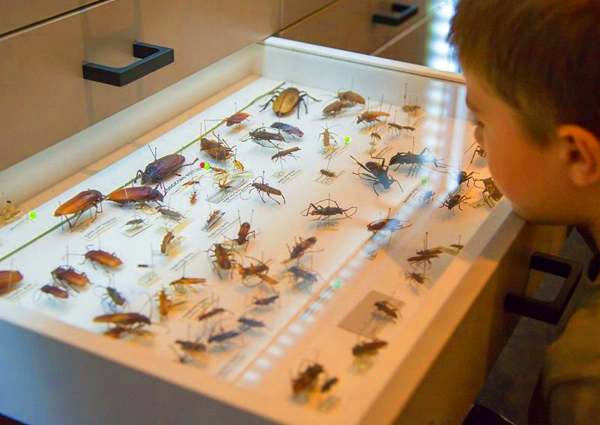 The SAM Discovery Centre has lots of drawers that the children can open, and look at the specimens. Source: SAM.

Christopher Sanders, A world of discovery, The Adelaide Review, 23 October 2018

On level one of the South Australian Museum is the Discovery Centre, a place where people of all ages can feed their curiosity about the natural word and where the centre’s staff can identify specimens brought in by the general public.

With live animals, including spiders, tree frogs, lizards, snakes and a live beehive and ant farm, and drawers full of specimens, the Discovery Centre is the museum’s wunderkammer (cabinet of curiosities) where people can come in to check out objects and specimens or call in to identify something they’ve found.

Linda Builth, one of the Discovery Centre’s information officers, says it’s the things that people fear or they find beautiful that are the most popular items to be identified but they get enquiries about absolutely everything.

“From jewellery to things from WWI, weapons, absolutely everything, pots, glass, anything and everything,” Builth says. “We’re a free service, so we even get enquiries coming in from North America, from South America and Europe. We must be one of the few free services running in the world to identify things. Thanks to the internet and because of technology they can send us things online.”

If something can’t be identified by one of the Discovery Centre’s information officers, then the staff can go to the museum’s team of scientists.

“We have the opportunity to go out the back there and speak to the correct faculty and curators and they’ll run the identifications,” she says. “If they get stuck we have the university next door and we can contact people interstate as well. An expert might be in Victoria or New South Wales, and we’ll just send an image through to them. I don’t think there’s been anything we’ve not been able to identify.”

People even discover something new, as a young boy did at the Museum’s Bring Us Your Bugs citizen science day on the Museum’s front lawns a few years ago.

“A little 10-year-old boy discovered a new spider up in the Hills, so it does happen,” Builth says. “I like working for this museum because they name it after the person who found it. So the little boy got his name on the spider. That’s really nice. We have children who collect for our specimen drawers in the room here. We have lots of drawers that the children can open, and look at the specimens.”