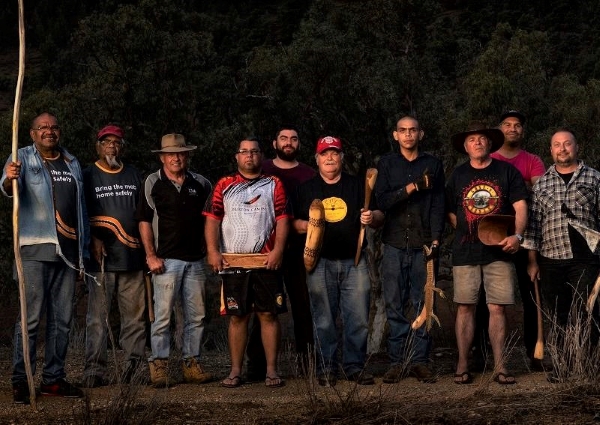 Some of the many frustrations about being an Aboriginal person in contemporary Australia are regularly being confronted with the belief that Aboriginal people and culture is dead or dying, and a lack of acknowledgement of the work Aboriginal people are constantly undertaking to maintain and develop cultural practices in the midst of governmental and institutional practices that diminish Aboriginal life.

I am delighted that I am able to challenge these assumptions and practices through my role as the William and Margaret Geary Curator, Aboriginal and Torres Strait Islander Art and Material Culture at the South Australian Museum.

Stepping into the role I inherited the responsibility of representing a project initiated by Ananguku Arts and Culture Corporation (Ku Arts) that involved men from my own Nukunu family of the Southern Flinders Ranges, including my father, uncles and cousins as they revitalise Nukunu carving practices in partnership with Adnyamathanha men from the Northern Flinders and Gammon Ranges. Adnyamathanha elder and master carver Roy Coulthard led the project which was magnificently captured by Port Augusta-based photographer and filmmaker Dave Laslett. The project has led to the Yurtu Ardla exhibition, ‘Yurtu Ardla’ meaning wood in the respective Nukunu and Adnyamathanha languages. The exhibition will be presented until Sunday, June 16.

The South Australian Museum is the home of the world’s most significant and representative collection of Aboriginal and Torres Strait Islander material culture with approximately 30,000 objects in its collections, and yet the museum held less than 20 known Nukunu objects that existed before the commencement of the Yurtu Ardla project. The majority of the objects were made by Nukunu man Paddy Thompson and acquired by anthropologist Norman B Tindale in the 1920s. The oldest object featured in the exhibition is a walking stick acquired in 1895 that is attributed to Adnyamathanha man Ted Coulthard, grandfather of Roy Coulthard and great grandfather of project participants Clayton Cruse and Dallas Brady.

Yurtu Ardla provided participants the opportunity to engage with the collections, which have served as both a reference point and inspiration to developing new works that are true to Nukunu and Adnyamathanha form.

Following engagement with the collections, carving camps were held on both Nukunu and Adnyamathanha country at Mambray Creek and Oraparinna with support from Natural Resources SA Arid Lands, Department for Environment and Water.

As curator, a poignant moment in the development of the project and exhibition was Ku Arts facilitation of a meeting between the South Australian Museum, Ku Arts and the Adnyamathanha Lands Trust Association to consider the temporary return of Adnyamathanha objects to Adnyamathanha country as part of the Oraparinna carving camp.

While the South Australian Museum regularly loans objects for exhibition, temporarily returning Adnyamathanha objects to country, including those made by Roy Coulthard’s father as part of the Oraparinna camp was a unique and affirming experience of the museum’s commitment to Aboriginal custodianship of cultural heritage.

The renaissance of carving among Nukunu men is underpinned by a relax of laws and attitudes that prevented Nukunu people from publicly engaging in cultural practice, and the presence of a cohort of Nukunu men who are committed to the practice.