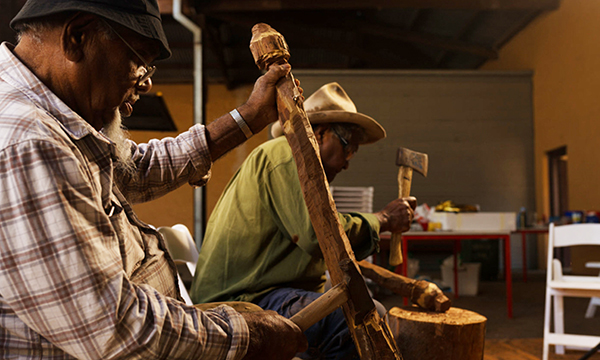 Through the Yurtu Ardla project, Ku Arts’ Programs Officer Clayton Cruse has furthered his connection to his Adnyamathanha heritage through wood carving.

The Yurtu Ardla exhibition, being held at the South Australian Museum, is the end of a long, five-year journey and is something that all the men involved are extremely proud of. 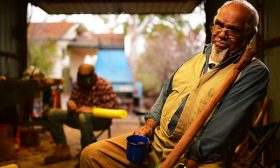 I first heard about Yurtu Ardla while I was working at the Mobile Language Team (MLT) as an Aboriginal language worker. To me this was a significant project because it gave Roy, a senior Adnyamathanha man, recognised as a master carver, the opportunity to pass on his skills and knowledge to a group of Nukunu men – Nukunu men who had both never practiced carving and who had grown up without an understanding of their heritage and heritage language.

The overwhelming majority of my work with the MLT was focused around working with my heritage language – Adnyamathanha – so I was instantly attached to the project. Ku Arts contacted the MLT to propose becoming partners in the project, to incorporate Adnyamathanha and Nukunu language throughout, as well as giving young MLT trainee, Anil Samy Jnr, who happens to be Nukunu, the opportunity to be involved.

This was really a dream project to be involved in. I could incorporate both Adnyamathanha and Nukunu language, working with the men to record them speaking, as well as provide advice about Aboriginal languages in general. Throughout the project, I also became a carver.

My nanna’s brother was a prolific carver and was great friends with Ngaurli (Pop) Roy Coulthard, who is the master carver for the project. I remember spending days with my nanna’s brother – my grandfather – at the back of my auntie’s house, watching him carve spears and boomerangs, among other things. So it seemed natural to be involved. Not only to work, but to learn.

I was also aware that my great great grandfathers’ artefacts were to be released from the South Australian Museum to be returned to Adnyamathanha country, on loan for the carving camp at Oraparinna, as a means of inspiring the participants. The sense of pride I gained from being able to see and hold these artefacts, that were made by my grandmothers’ grandfather, was immeasurable.

These were artefacts that were made when Adnyamathanha people were still practicing their customs and lore, so to be able to connect with those in a very intimate and personal setting instilled in me a greater sense of connectedness to my family, my culture and my ancestors; a direct link to my heritage.

The sense of pride the Nukunu men have gained from speaking their language is clear. It is worth mentioning that throughout this project, almost all of the Nukunu men had never spoken more than individual Nukunu words, so to have them speaking sentences was a tremendous result. This project has increased the vocabulary of a handful of Nukunu people. Also, the Nukunu men involved have effectively doubled the amount of known Nukunu artefacts.

Yurtu Ardla is a Ku Arts project, initiated by a group of Nukunu and Adnyamathanha men.

The project has been supported by Australia Council for the Artsand Arts South Australia.

The Yurtu Ardla exhibition is now on at South Australian Museum until Sunday, 21 July.