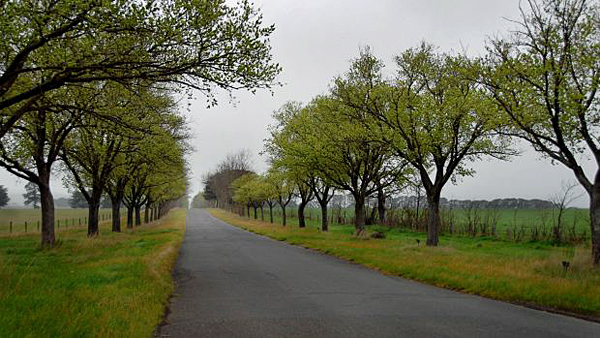 Megan Backhouse, Anzac Day 2017: from our avenues of honour come images of towns in mourning, The Age, 14 April 2017

Photographer Sarah Wood’s poignant 10-year project will be shown in the Franco-Australian Museum at Villers-Bretonneux.

They are on multi-lane freeways, along isolated country roads and in new residential developments. With their plaques, crosses and remnants of other signage, avenues of honour are street trees with a difference.

These living memorials, first planted in Australia during the First World War, have sparked renewed interest since they became the subject of intensive research more than a decade ago. But while some have been restored and new ones have been planted, other avenues have – like street trees everywhere – fallen victim to the introduction of roundabouts, powerlines, road widening, overpasses, age, neglect, drought, cypress canker and a litany of other ailments.

Sarah Wood is one of those working to ensure their future. For 10 years she has been taking photographs that play up the majesty of roads lined with rows – sometimes double rows – of mature, perfectly spaced trees that honour service and sacrifice. Her exhibition of 45 photographs of mostly Victorian street plantings opens at the Franco-Australian Museum at Villers-Bretonneux in France in time for Anzac Day on April 25.

Glenn Williams, the director of Treenet – an Adelaide-based urban tree research initiative that has been gathering information on avenues of honour – describes Wood as an international ambassador for these Australian memorials, some of which have been forgotten entirely and are only now being rediscovered.

At Eurack, near Colac, Wood photographed the Dutch elms, field elms and wych elms planted down one side of the main road from May 1916, when the place still had a school and a community hall. Wood has highlighted the isolation of the area in an image of the memorial trees giving way to sun-bleached paddocks.

Her photograph of the Calder Woodburn Memorial Avenue – a double row of more than 2400 river red gums, western grey box, spotted gums, ironbarks, lemon-scented gums and other eucalyptus species on either side of the Goulburn Valley Highway – has a decidedly quiet mood. She focuses on the gums’ mottled and fissured trunks, the fallen leaves and twigs and the vast scale of this ambitious avenue, which  traverses nearly 20 kilometres.

JLF (Fen) Woodburn planted the four rows between 1945 and 1949, initially as a living memorial to his son, Calder, who died during a mine-laying mission along the French coast in April 1942. Later, the avenue also paid tribute to other local servicemen killed in the Second World War.

According to a Victorian Heritage Register report, Woodburn’s choice of eucalypts was in contrast to the “almost universal use of exotic species” for WWI memorial avenues and reflected the way we started to think differently about Australian plants in the 1940s.