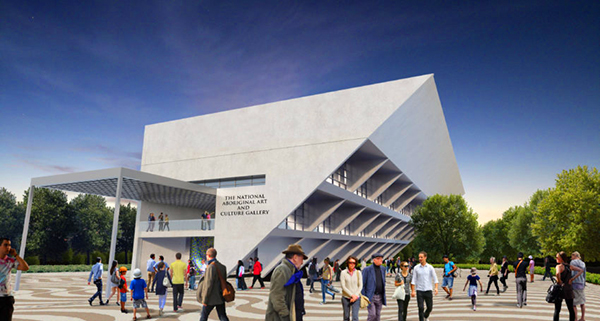 NATIONAL NO MORE: The State Government has removed the word “national” from the title of its Aboriginal Art and Cultures Gallery at Lot Fourteen. Render: Liberal Party SA.

The State Government has quietly removed the word “national” from the title of its mooted Aboriginal Art and Cultures Gallery at Lot Fourteen amid competition with the Northern Territory over plans to build what both governments claim will be Australia-first institutions.

The State and Federal Governments insist the name of the South Australian gallery is yet to be finalised, with a $200,000 State Government-funded scoping study still underway to determine the gallery’s “visions and key recommendations”.

But government documents show a clear change to the gallery’s name after the signing of the Adelaide City Deal – a trilateral funding agreement between the Federal and State Governments, and Adelaide City Council – in March.

In a pre-election media release and building render published in February last year, the SA Liberals referred to the gallery as the “Australian National Aboriginal Art and Culture Gallery”.

At the time, party leader Steven Marshall said the gallery would be “the jewel in the crown” of the Liberals’ plan for the former Royal Adelaide Hospital site – now known as Lot Fourteen.

“Adelaide is the natural home for the first national collection of Aboriginal Australia’s artistic and cultural heritage,” Marshall was quoted.

“The absence of a national gallery for Aboriginal Australia’s cultural and artistic heritage is a significant omission by Australian governments and a fantastic opportunity for South Australia.”

State Budget papers for the 2018-19 financial year – released in September – refer to the gallery as the “National Aboriginal Art and Cultures Gallery”.

A similar name – the “National Gallery for Aboriginal Art and Cultures” – is quoted in a State Government media release in February.

In that release, Marshall, in his current role as Premier and Arts Minister, said the gallery would make Adelaide “the centre for Indigenous art and culture nation-wide”.

“The gallery will be the first of its kind in Australia,” Marshall said.

However, the gallery’s name changes in the Adelaide City Deal, signed in March.

In that paper, the gallery is referred to as the “Aboriginal Art and Cultures Gallery” – with no mention of the word “national”.

The same name is repeated in an Art Gallery of SA media release sent in March, as well as the 2019-20 State Budget papers.

An excerpt from the Adelaide City Deal document, announcing funding for the “Aboriginal Art and Cultures Gallery”.

A State Government spokesperson told InDaily the name of the gallery was discussed during negotiations with the Federal Government on the Adelaide City Deal.

InDaily asked the spokesperson to elaborate on the nature of those discussions, but did not receive a response.

The spokesperson did, however, state that the Government was “100 per cent committed to delivering this gallery, which will be internationally significant”.

A spokesperson from the Federal Department of Infrastructure, Transport, Cities and Regional Development did not respond to questions from InDaily asking if the Federal Government had instructed the South Australian Government to drop the word “national” from the gallery’s title.

The spokesperson instead said: “the City Deal partners have recognised the importance of the inclusion of the Aboriginal Art and Cultures Gallery planned for Lot Fourteen.

“The establishment of an Aboriginal Art and Cultures Gallery at Lot Fourteen presents a historic opportunity to showcase to the world the art and cultural assets of Aboriginal and Torres Strait Islander people.

“The name of the gallery is still to be determined.”

In a statement to InDaily the Art Gallery of SA – a key stakeholder in the development of the new Aboriginal art gallery – said it was “not involved in the discussions to drop the word ‘national’ from the title of the Lot Fourteen proposed site”.

Underpinning South Australia’s plan to build an Aboriginal art gallery is ongoing negotiations in the Northern Territory to build what its Government calls an “iconic National Aboriginal Art Gallery” in Alice Springs.

That gallery hit a roadblock in January, when the territory’s Chief Minister Michael Gunner revealed the project had lost the support of traditional owners and its future at the proposed Anzac Oval site was under consideration.

The Northern Territory project was further sullied by the Adelaide City Deal, which committed $85 million in Federal Government funding towards the “Aboriginal Art and Cultures Gallery” in Adelaide.