You are here: Home » Articles filed under: 'News' » Article: 'Save the art, save the museum'

Save the art, save the museum

June 7th, 2018 | Browse other: News. | Tagged with: Berkshire Museum deaccession of works, Save The Art – Save The Museum, Sotheby’s | 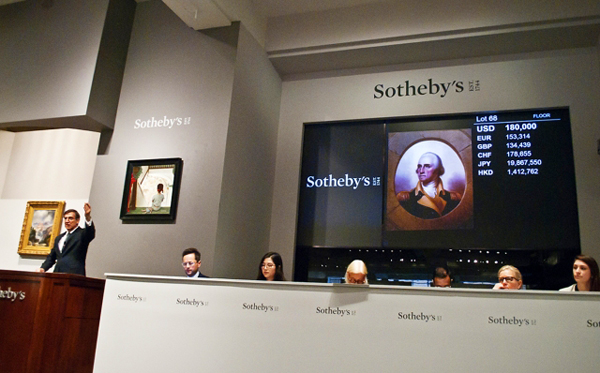 Rembrant Peale’s portrait of George Washington was the last of the of the first round of sales by the Berkshire Museum.

Sales of the most prized works from the museum’s collection netted over $40 million, but more will hit the auction block if the institution pursues its goal of making $55 million.

So it has begun. The first 13 of the 40 works marked for deaccession by the Berkshire Museum have been sold. George Lucas has bought Norman Rockwell’s “Shuffleton’s Barbershop” (1950) for his new museum and a baker’s dozen more were sent to the block earlier this month at Sotheby’s spring sales. These were the first works sold at auction following the Pittsfield, Massachusetts, museum’s settlement with Massachusetts Attorney General Maura Healey. In February,  Healey approved the sale designed to pad the museum’s endowment and radically reshape its mission, capping the spoils at a maximum of $55 million. The agreement, which to critics is a bit of a farce itself, has turned the sale into a three-act melodrama. The art is to be disposed of in three separate groups or “tranches,” until the total dollar amount is achieved. Tranche is a banking term derived from the Old French word for “slice”; the settlement, Healey’s office insists, was the best half-a-loaf compromise existing law allowed to mitigate the sell-off. Watching the auctions over the past two weeks, it felt more like death by a thousand cuts.

First to go were a drawing by Henry Moore, a Francis Picabia watercolor once owned by Apollinaire, and an early motorized sculpture by Alexander Calder. This last was acquired in 1933 by the museum from the sculptor himself. It was bought back, in effect, by Calder’s grandson for the Calder Foundation for $1 million, half the pre-sale low estimate. The sculpture was one of six works sold at such a discount. A large Daubigny landscape fell short of the minimum by $15,000, and Rembrandt Peale’s portrait of George Washington missed by $20,000; the Moore undersold by $160,000, and two works by Bouguereau were off by a half million or more each. Nineteenth-century works by Alberto Pasini and Frederic Church failed to meet their reserves and went unsold.

As the auctions went on, a sinking suspicion grew that, like so much the Berkshire Museum touches these days, even the liquidation was being bungled. Of the 13 artworks, only three sold at or slightly above their estimated minimum. These included the second of the two Norman Rockwells, “Shaftsbury Blacksmith Shop” (1940), which, like “Shuffleton’s Barbershop”, was gifted to the museum by the artist himself. Estimated at between $7 and 10 million, “Shaftsbury” barely made it to the low end and stalled. Only two works performed above expectations: a pair of magnificent Northern Renaissance paintings by Adriaen Isenbrandt, undervalued by both the auction house and the museum.

The Calder and two other works will relocate to public collections. Lucas will no doubt give his new Rockwell gem  pride of place when his eponymous Museum of Narrative Art opens in Los Angeles in 2021 (until then, it’s on loan to the Norman Rockwell Museum). And Church’s lush “Valley of Santa Isabel, New Granada” (1875),after foundering on the block, was purchased via private sale by the Pennsylvania Academy of Fine Arts, which promptly offered Berkshire residents free admission in perpetuity to come visit it.

The remaining 10 pieces were taken by unnamed private collectors, a particularly appalling aspect of the sales. These works, all formerly available to artists, scholars, and the general public, have now vanished from view. ‘Deaccession,’ far from being some arcane museum term, is rooted in the concept of access, with its implications of consent, permission, and unencumbered availability. Deaccession negates these qualities; it takes from the people what once was theirs. Legally, museums control the works in their collections, but ethically they don’t “own” them so much as care for them on the public’s behalf. That’s the whole purpose of their tax-exempt status. The trustees of the Berkshire Museum are ultimately stewards of the public good. If they were going to let their artworks go for so little, they should have made more of an effort to sell them to other institutions.

As the song says: “You take what you need and leave the rest. But they should never have taken the very best.” Museums generally cull from the bottom, deaccessioning works of lesser importance. The Berkshire Museum skimmed the cream. It placed its finest artworks in the auctioneer’s hands, at the mercy of the highest bidder, which generally means some anonymous merchant prince on the telephone. Privatization is one of the sins that brought demonstrators to picket outside Sotheby’s York Avenue entrance during the auctions. They held red and black signs evoking the “three billboards” of last year’s movie, condemning the sale as an “#artheist” and warning of dire consequences: “Is your museum next?”

The demonstrators represented Save The Art – Save The Museum (STA), the grassroots collective from the Berkshires that led the resistance against the deaccession. STA quickly formed on Facebook after the Berkshire Museum dropped the d-bomb in July 2017. It advocated alternatives to the sale, countered the museum’s specious talking points, and made continual noise. Photographs of STA protesting outside the museum were published around the world. (Full disclosure: since last August, I have been close to the STA inner circle as a supporter and as a writer bearing witness to the fight.)

The volunteer group’s commitment and sustained pressure during the first months of the crisis was nothing short of heroic. Its actions held the press’s interest, inspired a pair of lawsuits, and helped persuade AG Healey to launch an investigation that eventually knocked the artworks off Sotheby’s auction block in November. STA exposed just how widespread opposition to the sale is, and set an agenda, parts of which even the museum has tacitly acknowledged. Michael Firestone, Healey’s chief of staff, told STA leaders during a February conference call, “Without you, all of these pieces would have been auctioned last fall.”