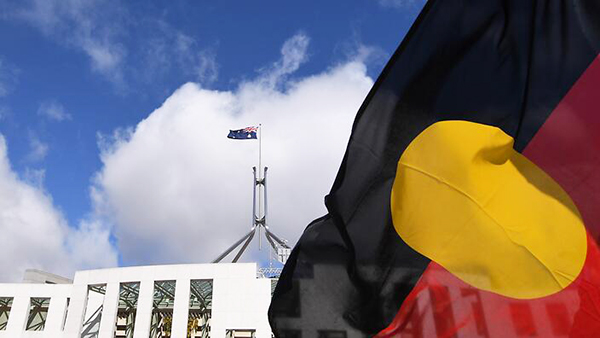 An Aboriginal flag flies outside Parliament House in Canberra (AAP).

The Morrison government has unveiled its eighth budget, and it’s splashing the cash to spur on the economy and cut unemployment. But what’s in the 2021 federal budget for mob?

The Morrison government is spending big in what it says is an attempt to boost jobs, with tens of billions being spent on infrastructure, jobs and training programs, child care and health and wellbeing.

Aged care and the disability sector are also getting more investment after damning Royal Commissions into both sectors — $12 billion being set aside for the National Disability Insurance Scheme and $17.7 billion being earmarked to boost and reform the aged care sector.

The treasurer Josh Frydenberg unveiled his third budget and revealed that the deficit is expected to reach $161 billion this year with the debt expected to peak at almost $1 trillion in 2025.

There are a number of big ticket investments targeting Indigenous communities including in women’s safety, employment, arts, education and remote housing.

Women’s safety is also getting bolstered as part of the government’s $1 billion spend on improving women’s safety and economic participation.

The government is slating $57.6 million to work with First Nations communities to tackle violence against women and children and a further $26 million over four years for the Family Violence Prevention Legal Services programs.

The government also revealed it is will set aside $31.6 million over the next five years for a personal safety survey for First Nations women run through the Australian Bureau of Statistics to record just how prevalent violence facing Indigenous women and girls is.

Remote Work for the Dole axed

The contentious Community Development Program for those living in remote communities will be scrapped — with $111 million planned over the next five years to set up a new remote jobs program in these regions.

The federal government said it will pause ‘certain’ mutual obligations for those under the CDP program but it’s not clear which ones those will be.

The government said it will be investing in more skills and training programs to replace current programs.

The Cashless Debit Card is also continuing with an undisclosed amount set aside for the program to continue in parts of the country – including WA’s Kimberley and Goldfields region, Queensland’s Bundaberg, Hervey Bay regions and South Australia’s Ceduna.

The government failed in its bid to pass legislation making the trials permanent, and instead the program is funded until 2023.

The government, as part of promised amendments, has also said it will boost economic participation in trial sites and build drug and alcohol rehabilitation centres.

Increased funding for girls academies for Indigenous women and girls with $63.5 million allocated through the government’s Indigenous Advancement Strategy to boost participation.

The government is investing funds into suicide prevention and improving crisis support for Indigenous communities.

The government unveiled a $117.2 million plan to establish a national database on performance and outcomes across the mental health system and conduct surveys on mental health of children and First Nations people.

There is also $58.8 million over the next two years to boost capacity and upskill First Nations mental health workers.

The federal government said it will commit $185 million for new houses, housing refurbishments and housing-related infrastructure in remote communities.

It said $35.8 million will be allocated to make remote communities safer, improve child and family safety and address alcohol-related harm.

There was no funding set aside for remote communities in other parts of the county.

The federal government is committing just $500,000 over the next two years to improve Indigenous heritage protection and boost First Nations decision making powers and involvement.