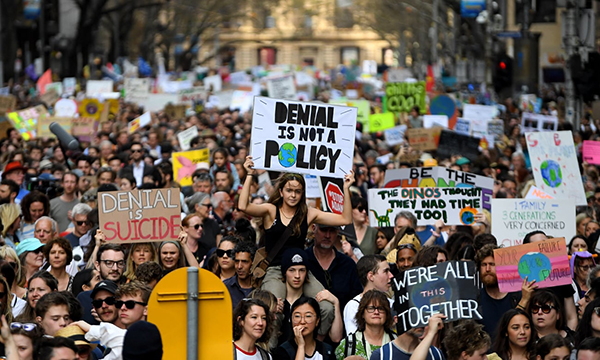 Only 6% of Australians say immigration is the biggest issue facing the country, while 19% nominate climate change. Photograph: James Ross/AAP.

David Marr, It’s the climate, not immigration, that keeps Australians awake at night, The Guardian, 26 November 2019

Something happened in 2017. Australia is second only to Canada in welcoming immigration on a large scale. Our faith in the benefits of accepting newcomers of all faiths and races is rock solid. But a couple of years ago we began to grow impatient about the government’s management of the immigration program, impatient in particular about overcrowding in our cities.

This is the verdict of the Scanlon Foundation’s 2019 Mapping Social Cohesion report, published on Tuesday. The mission of the foundation for the past decade or so has been to measure how this migrant nation hangs together. In that time an extraordinary 50,000 of us have been polled to track the hopes and fears that sweep Australia – and not just about immigration.

The author of the reports, Prof Andrew Markus of Monash University, finds most Australians now share “an underlying concern about the government not properly managing the situation – the impact on overcrowding, house prices, environment”.

Markus is one of this country’s leading authorities on the politics of race and this is the 12th report he has written for the Scanlon Foundation. His findings are a civilised rejoinder to those who skew politics to the far right in this country that their racist constituency does not speak for the nation.

But in 2019 Markus fears impatience with government management might imperil majority support for Australia’s immigration program. “This has not yet occurred, but the potential is evident.”

We are not Europe. Asked every year to name the most important problem facing their countries, Europeans have lately nominated immigration. “It’s sort of cooled down a bit now,” says Markus, “but even to the present day when people are asked what’s the main issue for the EU, they still nominate controlling population movement and immigration.” 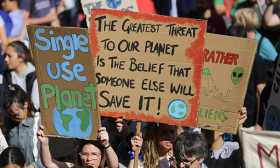 Concern about the climate crisis is surging. Photograph: Steven Saphore/AAP.

Not in Australia. We always put the economy at the top of the list. Immigration came in fourth in 2019, nominated by 6% of us. In second place on the list, after an abrupt rise, is the environment and climate change.

Markus has never seen such a sudden surge. The last was after the the Lindt cafe siege, when for a few years about 10% nominated national security and terrorism as the great problem facing the nation. “But this year climate change went not to 10, it went to 19,” says Markus. “And that’s so far ahead of the third issue. There’s a lot of daylight there.”

The importance of the shift is underlined by the discovery that climate sceptics have all but lost traction. In 2011, when 11% of us said climate change was our biggest worry, another 6% nominated overreaction to those fears as the great problem facing Australia. The following year, the sceptics outnumbered the climate worriers almost two to one.

Not any more. Against the 19% nomination for climate change in 2019, the sceptics could muster, at best, a contrary 1%. Markus sees this shift as an acute challenge to Canberra. “Morrison has got an opportunity to actually rebuild some capital in effective government,” he says. “But he’s got this issue of climate change. If he doesn’t deal with that, which is emerging as a major issue, that could very seriously damage this government.”

What do you think is the most important problem facing Australia today?

Showing the % who selected the issue as ‘most important problem’, by year of survey 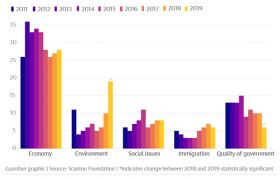 Markus began his work at the end of the Howard era and the arrival of Kevin Rudd. In those years of hope and renewal, the Scanlon survey showed nearly half of us believed government did the right thing for the Australian people almost always or most of the time.

But with Rudd’s collapse in 2010 went a good measure of trust in government. It has never recovered. In the weeks before Malcolm Turnbull’s downfall, the Scanlon survey of 2018 revealed only 29% believed in the good intentions of Canberra. After the re-election of the Morrison government this year, the figure is essentially unchanged at 30%.

It’s a long slide, but Marcus disputes claims in other surveys that Australia is experiencing a catastrophic loss of faith in democracy. “There are some people out there who do surveys with small samples,” he says. “And with small samples from one year to the next you will get variability. And that produces headlines.

“But we’ve got I think the most rigorous way of surveying. We actually do it in two different modes – by telephone and by self-administration – and what that is showing is much more a picture of ‘steady as she goes’ rather than dramatic decline.”

They shift a little, and the shifts have lately been gloomy, but year in and year out the steady findings of the Scanlon surveys define Australia:

Then there’s the darker side:

The level of hostility to Muslims was masked until a couple of years ago, when the Scanlon Foundation began parallel tracking its research. Telephone interviews over the years showed 21% to 25% of us hostile to Islam. But these figures essentially double when surveys are completed in private and online.

The gap between the two sets of results shows us to be a polite people. We hesitate to admit personal unhappiness or gloom for the future of the country. We clearly don’t enjoy confessing to strangers that we’re in financial trouble. A little of our optimism about the impact of mass immigration evaporates online. We’re even shy of confessing to strangers that we don’t much like Christians – only 4% would own up to that on the telephone in 2019, but 14% said so clearly online.

Markus argues that while our sunny picture of the country darkens a little when we answer in private, those Australians most hostile to race speak loud and clear however they are surveyed.

“The views of the hardcore negative types are pretty constant irrespective of the surveys,” says Markus. “And often it’s around 10% of the population. Now it would be a worry if self-completion surveys then showed it wasn’t 10% but it was 20% to 25%. But it’s actually pretty constant.”

So who are the most hostile to immigration?

Easy answer: One Nation voters. The 2019 report shows One Nation voters are profoundly pessimistic about Australia’s future; loath globalisation; don’t give a rats about the environment; are scathing about the motives of government; dismiss multiculturalism; are fiercely hostile to Muslims; couldn’t care less how harshly we treat asylum seekers; and are the only group in the survey – young and old, rich and poor, city and country – where most still hanker for the old White Australia policy of selecting migrants by race and religion.

How important here is the city/country divide?

Not at all on the importance of climate change. Wherever we live in cities or the bush, we agree that after the economy, the climate is the single biggest problem facing Australia today. But on immigration, the gap between city and country widens significantly.

The 2019 survey found that outside the capital cities there was an 8% drop in support for multiculturalism; a 4% rise in those wanting immigrants selected by race and religion; a 6% fall in those concerned about the treatment of refugees; and, though the bush is where migrants don’t settle and governments are desperate to send them, a nine-point jump to 49% of those who believe Australia’s immigration intake is too large.

The fundamentals are sound, even as about one in 10 of us continue to rage against this new Australia of many faiths and many cultures

But this is not the most dramatic divide revealed in the Scanlon surveys over the years. The education line cuts across the immigration debate like a mighty trench:

Read more
Positions Vacant » View All
» Program Manager – MAAS
» ACWG Frozen Tissue Collection Officer – AM
Latest News » View All
Egyptians petition for BM to return
the Rosetta Stone Read more.
BM pledges ‘not to dismantle’ Parthenon
sculptures amid reports of talks with Greece Read more.
NHM to install life-size Titanosaur
cast The world’s largest dinosaur to fit (- just) Read more.
Gallerie d’Italia’s Art & Finance exhibition
- a long & mutually beneficial history Read more.
TMAG’s ‘Lost’ last Tasmanian tiger remains
found! ... cataloguing collections matters Read more.
Top +
Council of Australasian Museum Directors c/o Mr Brian Oldman, South Australian Museum PO Box 234 Adelaide, South Australia 5001 Australia, © CAMD 2022
Copyright: All information and resources provided on this website remain the copyright of the Council of Australasian Museum Directors. Permission is granted for viewing and downloading for personal and not for profit purposes. Those wishing to reproduce any materials for commercial, educational or other uses are requested to contact us.
Disclaimer: The content of this website is provided for information purposes only and is not intended as a substitute for professional advice. No claim is made as to the accuracy or authenticity of the content of the website. The Council of Australasian Museum Directors does not accept any liability to any person for the information or advice (or the use of such information or advice) which is provided on this website. The information on our website is provided on the basis that all persons accessing the site undertake responsibility for assessing the relevance and accuracy of its content. No responsibility is taken for any information or services which may appear on any linked web sites. Hostgator.
.