You are here: Home » Articles filed under: 'News' » Article: 'TMAG’s (& other) Tasmanian tigers' 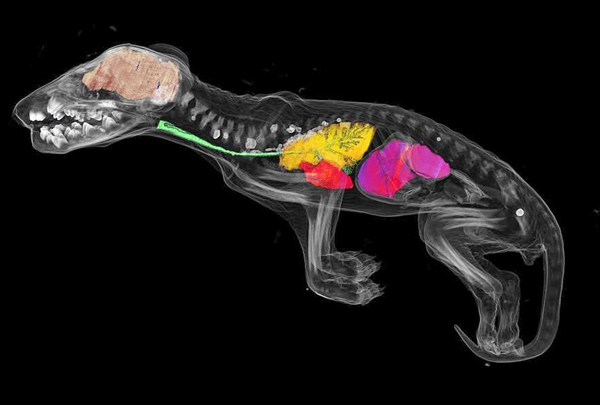 CT scans of thylacine specimens are being used to investigate why they resembled dogs despite last sharing an ancestor 160m years ago.

Joeys of thylacines, or Tasmanian tigers, look much like the young of every other marsupial: bald, pink, and with pronounced forelimbs and jaws for crawling into their mother’s pouch and latching on to a teat.

So it’s perhaps not surprising that, in the 200-year history of collecting and cataloguing various thylacine specimens for museum exhibits, there has been a bit of a mix-up.

The issue was discovered when researchers from Melbourne University and Museums Victoria used the international thylacine specimens database, a catalogue of everything from pelts to bone fragments, to request access to every known preserved joey that had not developed past the stage of leaving the pouch, which happens around 12 weeks of age.

There were 13 on the list, including one in the Czech Republic. But two specimens, sent from the Tasmanian Museum and Art Gallery, turned out to be either quolls or Tasmanian devils.

“The one that we scanned had a different number of vertebrae to the Tasmanian tiger, and also had enlarged epipubic bones, which are the centralised bones in the pelvic area that help support the pouch,” Christy Hipsley from Museums Victoria said. “Those are very reduced in the thylacine so we can see automatically that this is definitely not a thylacine skeleton.”

The museum requested the specimens in order to create 3D digital models using a CT scan. They aimed to show the point at which thylacines change from looking like every other marsupial to appearing more dog-like, with pronounced hind limbs and a predator’s jaw.

The CT scan allowed researchers to create a clear model of each specimen thylacine’s skeleton without dissecting, which Hipsley said would be wasteful.

“They are very rare,” she told Guardian Australia. “That way we were able to look at their internal morphology without actually damaging them in any way and that creates a digital record that other people can use as well on the other side of the world; they just can download the files.”

Digital scans are also more accurate, Hipsley said, “because once you cut things apart they lose their shape somewhat.”

The joeys were all preserved in ethanol and of animals aged between 1.5 and 12 weeks, which allowed researchers to map out their development into something that closely resembled a dog.

That information will then be used to study the thylacine genome, which was sequenced by a team led by the University of Melbourne.

Hipsley said the aim was to “target the genes or the genetic mechanisms that underlie that really specialised morphology”; in other words, to figure out why thylacines look like dogs despite last sharing an ancestor during the Triassic period, 160m years ago.

Researchers are also examining the thylacine genome for signs of convergent evolution, looking to see if morphological similarities are matched by genetic similarities.

It all contributes to the ultimate end goal of bringing back a thylacine, a project that is technologically distant but theoretically possible.

“As far as we know the Tasmanian tiger is completely gone,” Hipsley said. “But it might be something where we can use another animal’s cells as a scaffold and then insert the genome to try and reconstruct the Tasmanian tiger. So definitely, knowing the biology, the development, could help that process.”

Reports of thylacine sightings are not uncommon, despite the last known animal dying in Hobart zoo in 1936. In 2017, researchers from James Cook University launched a search of the Cape York peninsula in Queensland after “plausible” reports of possible sightings.