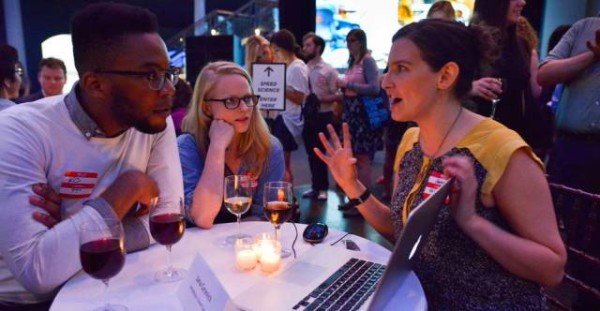 Ralph Gardner Jr. goes to a sort of speed-dating event, where he learns from American Museum of Natural History scientists.

You’re obviously familiar with the concept of speed dating, even if you’ve never tried it. That’s an event where you “date” new people for five minutes or so until a bell, or gong, goes off and you move along to the next table and your next assignation.

I can’t attest to the success of the process since I’ve never tried it. But I suspect that if there’s any lesson to be learned from Internet dating sites and apps such as Tinder, it’s that love, or at least lust, is a hardy seed capable of establishing itself in the least promising soil.

Last week, the American Museum of Natural History and the blogging and social networking platform Tumblr decided to adapt the speed-dating concept to science.

Instead of getting five minutes with a prospective mate, the allotted time would be spent with one of the museum’s scientists. There were 24 of them, traveling among 12 tables. And instead of sharing your taste in food and music and attitudes toward organized religion (or whatever people discuss on speed dates), you’d get to pepper paleontologists about whether Tyrannosaurus rex had feathers or chat with astrophysicists about the possibility of a multiverse and whether black holes might serve as portals, sort of like the Bleecker-Lafayette subway station, facilitating travel between one universe and another.

If you want to have a try at science speed-dating, get along to the Customs House Library at Circular Quay, Sydney on Wednesday 19 August at 6:30pm.  Find all the details here.