London’s Science Museum has unveiled plans for a new green energy gallery sponsored by the Indian conglomerate Adani, which has significant interests in coal mining and coal-fired power.

The museum’s partnership with Adani was announced at the Global Investment Summit taking place at the museum as part of the run-up to the Cop26 Climate Summit in Glasgow next month. A demonstration was held outside the event by Extinction Rebellion protestors.

The sponsorship deal will see the development of a new exhibition space, Energy Revolution: The Adani Green Energy Gallery, exploring how the world can undergo the energy transition necessary to curb the climate emergency. 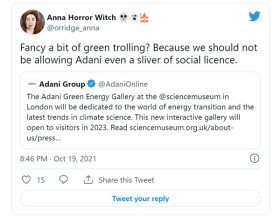 Visitors to the new gallery will see “how data visualisations and future projections are key to generating knowledge, informing decisions about how we live and stimulating creative and innovative solutions”.

Mary Archer, chair of the Science Museum Group, said: “This gallery will take a truly global perspective on the world’s most urgent challenge. We face a grave threat, but the future is not predestined – it is still in our hands if we can build the coalition required for urgent and far-reaching action.”

Due to open in 2023, the exhibition will replace the existing Atmosphere Gallery, the museum’s first permanent exhibition on climate change, which opened in 2010 and was itself sponsored by Shell. 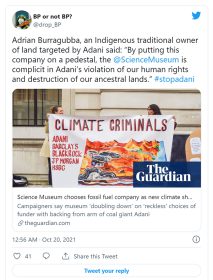 News of the deal has been met with outrage by environmental campaigners. Varsha Yajman, an Indian-Australian climate activist and former School Strike 4 Climate organiser, said: “It is embarrassing that the Science Museum would support Adani, a company ignoring the science and destroying what should be preserved and sacred to the indigenous populations of India and Australia.”

The museum has also been criticised for overlooking Adani’s human rights record and treatment of indigenous communities in Australia, where it is pushing through a coal mine in the face of widespread opposition.

The announcement comes after a high-profile backlash against the museum’s decision to make Shell the main sponsor of its Our Future Planet exhibition on carbon capture, and the recent resignation of the museum’s former director, Chris Rapley, from its advisory group over fossil fuel sponsorship.

The Science Museum Group has consistently defended its stance on working with fossil fuel partners, saying that sponsorship achieves pubic good and enables it to challenge the industry to show leadership on the climate crisis.

Chief executive Ian Blatchford said: “Adani Green Energy already has one of the world’s largest renewable portfolios and plans to invest $20bn in clean energy over the next 10 years. And be in no doubt, such massive investments are needed to move India from high-carbon to low-carbon energy whilst still meeting their growing energy needs […] The company has stated publicly a remarkable ambition: to be the largest renewable power company in the world by 2030.”

He added: “Trustees of the Science Museum Group are not convinced by the argument from some who say we should sever all ties with organisations that are ‘tainted’ by association, direct or indirect, with fossil fuels. We believe the right approach is to engage, debate and challenge companies, governments and individuals to do more to make the global economy less carbon intensive. Adani Green Energy is an example of an energy sector business bringing expertise and investment to renewables at the scale needed to deliver meaningful change.”

How can museums change lives in a post-pandemic world? Our inspiring conference programme will explore the ideas and vision we need to not only survive, but to thrive in the future. Online places start from just £45, or attend in person for as little as £190.

Join us in Liverpool this November