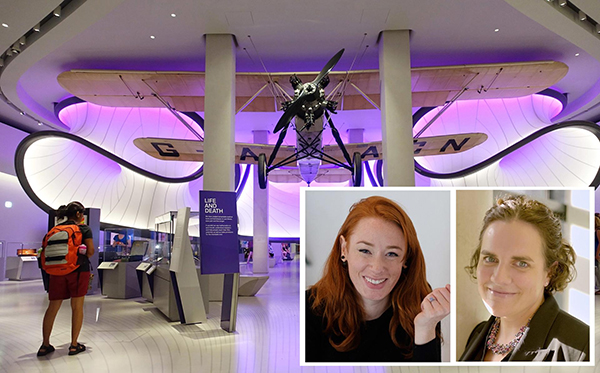 Hannah Fry and Jo Foster quit museum as it partners with Indian company Adani to sponsor a new “green” gallery, due to open in 2023.

Two trustees have resigned from the board of the UK Science Museum Group because the institution has signed a sponsorship deal with the fossil fuel company Adani. The controversy comes as politicians and environmental experts from around the world descend on Glasgow for the 26th UN Climate Change Conference, Cop26 (until 12 November).

Hannah Fry, a professor in the Mathematics of Cities at University College London, stepped down, saying that she is concerned “the Science Museum is giving the false impression that scientists believe the current efforts of fossil fuel companies are sufficient to avoid disaster”. Jo Foster, the director of the UK charity Institute for Research in Schools, also opposes the decision.

The museum group recently announced that the Adani Green Energy company, part of the Indian conglomerate Adani, will sponsor a new gallery, called Energy Revolution: the Adani Green Energy Gallery, which is due to open in 2023. Gautam Adani, the company founder, tweeted: “The new gallery will explore how we can power the future through low carbon technologies. It will be a reminder of the power of the sun and the wind in our daily lives.” But the company has significant interests in coal mining. 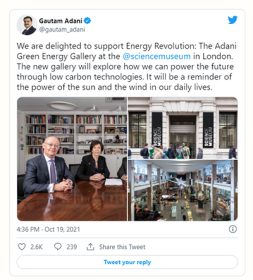 In a statement in the Times, Fry further outlined her reasons for her departure, saying: “I share the concerns of many that energy companies present themselves as transitioning, while spending vast sums on creating new mines and finding new oil fields… I worry about how easily distracted we are by investment in renewable energy and carbon capture storage, without realising that, given increased global energy demand, it means nothing unless it provokes a marked reduction in burning fossil fuels.”

Mary Archer, the chair of the Science Museum Group Board of Trustees, says in a statement that she reluctantly accepted the resignations of Foster and Fry. “We fully respect their decision to step down, which reflects views they expressed during recent board discussions on accepting sponsorship from Adani Green Energy, and they will both remain critical friends of the Science Museum Group,” she adds.

“Solutions begin with difficult conversations, among friends, in individual organisations and on the world stage. Differences exist but we agree on so much, including the shared hope that the outcome of the Cop26 talks getting underway in Scotland tomorrow will be a new global consensus to act more urgently to address the existential threat of climate change,” Archer says.

Last month meanwhile, the climate scientist Chris Rapley resigned from the group’s advisory board in protest at the institution’s “willingness to accept oil and gas sponsorship”. 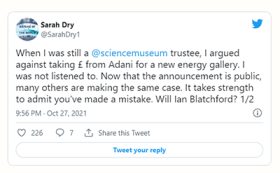 The science author and historian Sarah Dry withdrew as a trustee of the Science Museum Group in March after she was asked to support the government’s position on contested heritage. Dry tweeted: “When I was still a Science Museum trustee, I argued against taking £ from Adani for a new energy gallery. I was not listened to. Now that the announcement is public, many others are making the same case. It takes strength to admit you’ve made a mistake. Will [Science Museum Group director] Ian Blatchford?”