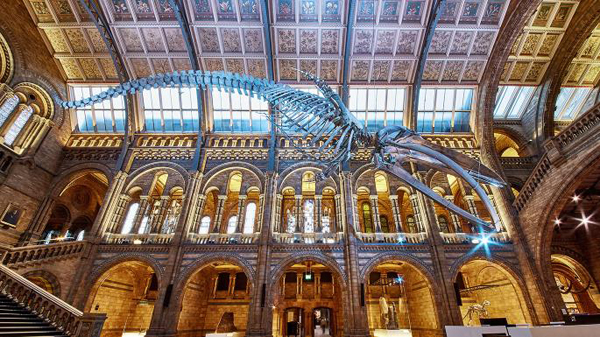 A blue whale skeleton went on display in the Natural History Museum in July.  The spat with the Science Museum has helped to showcase the astonishing variety of artefacts held in both of the museums. TRUSTEES OF THE NATURAL HISTORY MUSEUM/PA WIRE

It was an insult calculated to wound. The Science Museum declared its rival next door to be “full of old fossils”.

For the Natural History Museum, admittedly not lacking in old fossils, there was only one response. Its Twitter account sent a picture of a cross vampire fish from its collection.

And so the scene was set for one of the greatest scientific battles since Huxley and Wilberforce decided to meet one evening to have a little chat about the merits of evolution by natural selection. It also, along the way, helped to showcase the astonishing variety of artefacts held in both of the museums. 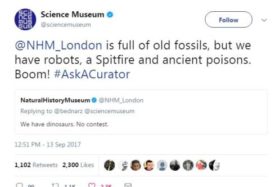 Ouch! The Science Museum draws the first blood with its scathing attack on the Natural History Museum and its collection of ancient relics

On being confronted with the fearsome vampire fish the Science Museum immediately parried on its own Twitter account with an image of a grotesque merman (a 19th-century fraud) and the threat of its Polaris missile.

Facing an opponent whose opening move was to invoke the nuclear option, a lesser rival might have backed down. Not so the Natural History Museum. Instead, its social media manager pointed out that “our cockroach specimens will survive us all” in the event of nuclear attack — and presented an image to prove it.

Over the course of dozens more tweets, the two museums tried to gain the upper hand. The Natural History Museum decided to unleash its sea dragons; the Science Museum responded with a submarine to escape. A locust preserved midway through eating a mouse was seen off by a jar of the pesticide DDT and an Edwardian fly swatter.

When the Natural History Museum upped the stakes with a goliath beetle the size of a human hand, the Science Museum dusted off its 1860s Enfield carbine rifle.

Will Stanley, a communications officer at the Science Museum, was responsible for its tweets, which went viral. He said it was a good opportunity for both museums to show off. “With limited space in the museum, we often use social media to reveal objects not on display. The duel gave us this opportunity and it’s been wonderful to see so many people across the world enjoy exploring our incredible collections,” he said.

After a day, a lot of fleas, one elephant and an ear trumpet, the contest finally ended amicably with a picture of two dancing seals from the Natural History Museum’s photography exhibition.

Or did it? Today Roger Highfield, director of external affairs at the Science Museum, seemed less keen on détente. “Ultimately it all boils down to our supercool technology — from submarines to satellites — versus their old fossils, dinosaurs and fleas,” he said. “Of course, we at the Science Museum back human ingenuity to win the day!”