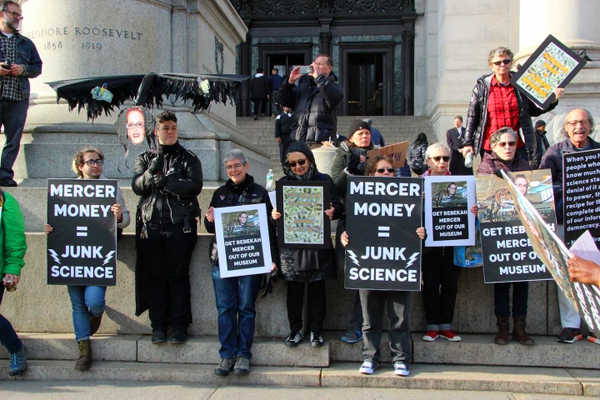 A protest against Rebekah Mercer’s position on the American Museum of Natural History’s board of trustees organized by Revolting Lesbians on January 21. Photo by and courtesy Saskia Scheffer.

Benjamin Sutton, Scientists and Curators Urge American Museum of Natural History to Drop Funder of Climate Change Denial from Its Board, Hyperallergic, 24 January 2018

Mercer, a Trump donor turned Trump advisor and a major supporter of climate change-denying organizations, has served on the museum’s board since 2013.

More than 250 scientists have signed a letter calling for the American Museum of Natural History (AMNH) to remove a funder of climate change-denying organizations from its board of trustees. Rebekah Mercer, a major donor to Donald Trump’s presidential campaign and a member the executive committee of his White House transition team, has been on the museum’s board since 2013.

In a separate letter sent on January 19 to the AMNH’s senior vice president and provost of science, Michael J. Novacek, 28 of the museum’s curators voiced similar concerns, according to the New York Times. The curators express “profound concern” about Mercer’s support of groups that they claim “challenge and politicize climate change science.”

Rebekah Mercer and her father Robert Mercer, through their Mercer Family Foundation (which she chairs), have given millions to climate change-skeptic organizations including the Heartland Institute, according to a report by Bloomberg. The family is a part owner of Breitbart News and has given more than $35 million to Republican candidates and Super PACs since 2010, according to the Washington Post.

“Rebekah Mercer and the Mercer Family Foundation, political kingmakers and the financiers behind Breitbart News, have given tens of millions of dollars to a list of organizations who attack climate science and policy solutions,” the scientists’ letter, initiated by the mobile Natural History Museum, reads in part. “This includes ringleaders of climate denial such as the Heartland Institute, which garnered $5.9 million from the Mercers from 2008–2016. While on the Trump Administration Transition Team, Rebekah Mercer nominated climate denier Arthur Robinson, board member of Heartland Institute, for consideration as a National Science Advisor.” The Natural History museum has also launched a petition addressed to the chairman and president of AMNH’s board, calling for Mercer’s removal.

Efforts to pressure the AMNH to remove Mercer have recently intensified, including a rally on January 21 outside the museum organized by Revolting Lesbians. Before of the protest, the group sent a letter to each of the museum’s trustees making the case for removing Mercer. An accompanying fact sheet documents more than $42 million in contributions that the Mercer Family Foundation has made to conservative organizations that promote climate change denial and/or the loosening of environmental protection measures.

“Regardless of the independence of AMNH’s scientific research, Rebekah Mercer’s position as a trustee creates suspicion about that independence, and brings the integrity of the museum into question,” Revolting Lesbians’ letter reads, in part. “It also offers Mercer legitimacy outside of her alt-right domain. She is a powerful right-wing activist, and a racist, who uses her fortune as a destructive force to thwart fundamental democratic principles. For these reasons, Rebekah Mercer must resign, or you must act to remove her from the board.”

In 2016, following a similar campaign aimed at ending conservative billionaire David H. Koch’s 23-year tenure on AMNH’s board of trustees, Koch left the board. At the time, the AMNH denied that the decision had anything to do with the protests and letters calling for Koch’s departure. In response to the campaign aimed at Rebekah Mercer, a spokesperson for the Museum sent Hyperallergic the following statement:

As a scientific and educational institution, the Museum deeply respects the work and views of scientists — both those who work as colleagues at the Museum and those from the broader scientific community. We also respect and understand scientists’ role in society, including adding their voices to political debates that relate to scientific issues. The Museum itself, however, does not make appointment decisions concerning staff or Trustees based on political views.

We believe that human-induced climate change is well-supported by scientific evidence and is one of the most serious issues currently facing our planet. We are deeply committed to presenting evidence-based, scientific information about climate change to a broad public. That has included, and continues to include, exhibitions, educational and public programs, scientific research, and content in our permanent halls, including updating content where we have new scientific information. You can view a full list here.

It’s not the role of Trustees or donors to make decisions about scientific and educational content. At the Museum, those decisions are made by scientists and educators based on evidence, facts, and research.