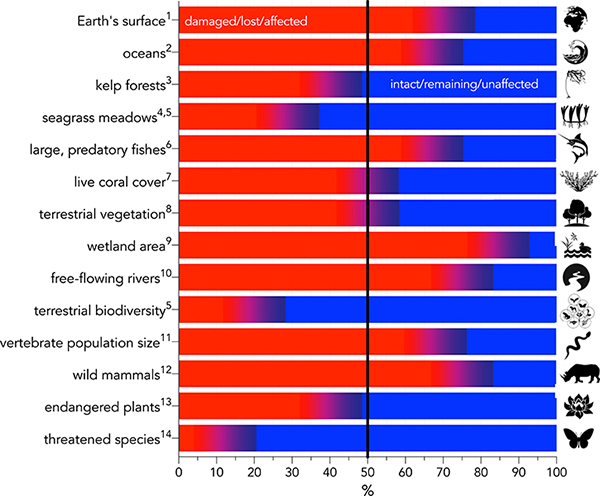 Underestimating the Challenges of Avoiding a Ghastly Future, Frontiers in Conservation Science, 13 January 2021

We report three major and confronting environmental issues that have received little attention and require urgent action. First, we review the evidence that future environmental conditions will be far more dangerous than currently believed. The scale of the threats to the biosphere and all its lifeforms—including humanity—is in fact so great that it is difficult to grasp for even well-informed experts. Second, we ask what political or economic system, or leadership, is prepared to handle the predicted disasters, or even capable of such action. Third, this dire situation places an extraordinary responsibility on scientists to speak out candidly and accurately when engaging with government, business, and the public. We especially draw attention to the lack of appreciation of the enormous challenges to creating a sustainable future. The added stresses to human health, wealth, and well-being will perversely diminish our political capacity to mitigate the erosion of ecosystem services on which society depends. The science underlying these issues is strong, but awareness is weak. Without fully appreciating and broadcasting the scale of the problems and the enormity of the solutions required, society will fail to achieve even modest sustainability goals.

Humanity is causing a rapid loss of biodiversity and, with it, Earth’s ability to support complex life. But the mainstream is having difficulty grasping the magnitude of this loss, despite the steady erosion of the fabric of human civilization (Ceballos et al., 2015; IPBES, 2019; Convention on Biological Diversity, 2020; WWF, 2020). While suggested solutions abound (Díaz et al., 2019), the current scale of their implementation does not match the relentless progression of biodiversity loss (Cumming et al., 2006) and other existential threats tied to the continuous expansion of the human enterprise (Rees, 2020). Time delays between ecological deterioration and socio-economic penalties, as with climate disruption for example (IPCC, 2014), impede recognition of the magnitude of the challenge and timely counteraction needed. In addition, disciplinary specialization and insularity encourage unfamiliarity with the complex adaptive systems (Levin, 1999) in which problems and their potential solutions are embedded (Selby, 2006; Brand and Karvonen, 2007). Widespread ignorance of human behavior (Van Bavel et al., 2020) and the incremental nature of socio-political processes that plan and implement solutions further delay effective action (Shanley and López, 2009; King, 2016).

We summarize the state of the natural world in stark form here to help clarify the gravity of the human predicament. We also outline likely future trends in biodiversity decline (Díaz et al., 2019), climate disruption (Ripple et al., 2020), and human consumption and population growth to demonstrate the near certainty that these problems will worsen over the coming decades, with negative impacts for centuries to come. Finally, we discuss the ineffectiveness of current and planned actions that are attempting to address the ominous erosion of Earth’s life-support system. Ours is not a call to surrender—we aim to provide leaders with a realistic “cold shower” of the state of the planet that is essential for planning to avoid a ghastly future.

Major changes in the biosphere are directly linked to the growth of human systems (summarized in Figure 1). While the rapid loss of species and populations differs regionally in intensity (Ceballos et al., 2015, 2017, 2020; Díaz et al., 2019), and most species have not been adequately assessed for extinction risk (Webb and Mindel, 2015), certain global trends are obvious. Since the start of agriculture around 11,000 years ago, the biomass of terrestrial vegetation has been halved (Erb et al., 2018), with a corresponding loss of >20% of its original biodiversity (Díaz et al., 2019), together denoting that >70% of the Earth’s land surface has been altered by Homo sapiens (IPBES, 2019). There have been >700 documented vertebrate (Díaz et al., 2019) and ~600 plant (Humphreys et al., 2019) species extinctions over the past 500 years, with many more species clearly having gone extinct unrecorded (Tedesco et al., 2014). Population sizes of vertebrate species that have been monitored across years have declined by an average of 68% over the last five decades (WWF, 2020), with certain population clusters in extreme decline (Leung et al., 2020), thus presaging the imminent extinction of their species (Ceballos et al., 2020). Overall, perhaps 1 million species are threatened with extinction in the near future out of an estimated 7–10 million eukaryotic species on the planet (Mora et al., 2011), with around 40% of plants alone considered endangered (Antonelli et al., 2020). Today, the global biomass of wild mammals is <25% of that estimated for the Late Pleistocene (Bar-On et al., 2018), while insects are also disappearing rapidly in many regions (Wagner, 2020; reviews in van Klink et al., 2020).