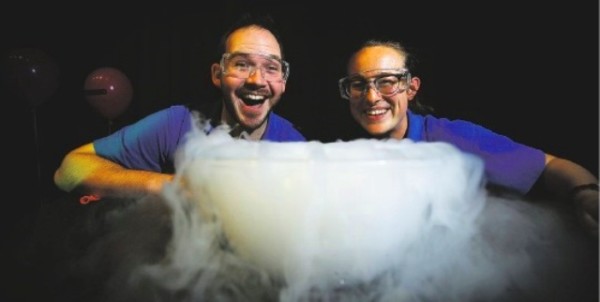 Two passionate science presenters have been handpicked to travel to China where they will feature in performances as part of the Beijing Science Festival.

Scitech’s Tom Coe and Emma Lomas will represent Australia with the hugely popular science show, Supercool. They will join presenters from around the world including Japan, Germany, Italy, South Africa and Britain.

Written and produced by Scitech, Supercool is one of the science centre’s longest-running and most successful shows. The message and delivery of the show has been revisited and refined into a truly accessible, inspired and world class performance.

“This is one of our most popular shows and we are excited to be able to share it on an international stage again. Supercool reminds the audience of the importance their own curiosity has in scientific thinking and encourages them to embrace it, share it, and make their own meaning of our show,” said Scitech Science Communicator, Tom Coe.

This is the second time Scitech has been invited to perform at the Beijing Science Festival. In 2013, presenters garnered huge accolades for their Ignite Your Curiosity show which, like Supercool, is performed entirely without words – instead using music, body language and perfectly timed science theatrics to reveal how chemistry is everywhere in daily life.

“The organisers are always thrilled with our shows and interested in Scitech’s unique style of performing which is a very different to how they present in Beijing. They were keen for us to bring this form of storytelling in science communication to their festival,” said Tom.

The Scitech duo will be performing up to three shows a day at the eight-day festival, and will also be meeting with fellow science communicators and the public.

“Emma and I are very excited to introduce the Beijing crowds to the wonders of what can be done with extreme temperatures” said Tom. “More than that, we’re thrilled to have an opportunity to share our passion for promoting science on such a large scale.”

The Beijing Science Festival will take place in the Beijing Olympic Park from 18 to 25 September.

Scitech has a strong international relationship with the Beijing Association of Science and Technology having previously attended Beijing Science Week in 2012, Beijing Science Festival in 2013 and the Beijing Youth Science Creation Competition for the last 10 years.

In other Scitech news…

Power is Knowledge Award from Beijing
Scitech was recently presented with a “Knowledge is Power” Special Award at the 35th Beijing Youth Science Creation Competition earlier this year. The award was a testament to Scitech’s dedication to education in science, technology, engineering and mathematics (STEM). Scitech and Rio Tinto have sent two students to Beijing each year since 2006 as part of the Beijing Bound competition.

Miraikan (Japan’s National Science Centre) and the Bloomberg Happiness project
Scitech staff will take part in a global initiative that will connect W.A. secondary students to develop visual contents, which will evaluate and convey the idea of “HAPPINESS on EARTH.” The finalised projects will be installed onto Miraikan’s Geo-Cosmos Globe as a part of their permanent exhibition. The project will look to build skills and knowledge in youth people in line with goals of STEM education and encourage international expansion and outreach of STEM initiatives through cooperation across the globe. This project is funded by the Japanese Government and Bloomberg.