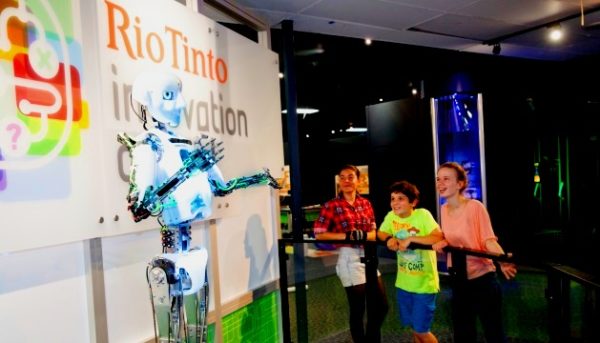 Scitech was recognised for this evolving showcase dedicated to innovation, creativity and new technology, which was made possible through the long-standing partnership with Rio Tinto since 2003.

Alan Brien, Scitech CEO says “It is wonderful to be recognised for our work on the international stage, successfully competing against some of the world’s best institutions. We are grateful to be able to work with partners such as Rio Tinto to ensure that our visitors, all 300,000 of them annually, learn something new and surprising that also relates to their day-to-day lives.”

“To remain competitive in a rapidly changing world it is essential that our future leaders are truly innovative thinkers,” Rio Tinto Chief Executive Iron Ore, Australia, China and Korea, Andrew Harding said. “We are a proud supporter of Rio Tinto Innovation Central and Scitech’s work across our state acting as a catalyst for young people to develop the skills and thinking that will make them the innovative leaders of tomorrow.”

Creativity is recognised as an essential part of innovation, and in 2016 the RTIC Artist in Residence is Professor Eleanor Gates-Stuart with “Under the Surface”, a unique projection installation using Spatial Augmented Reality (SAR) techniques. 87% of visitors to RTIC thought the experience was relevant to their lives, 86% felt RTIC had a positive impact on their attitude to science and 98% would recommend a visit to others (according to Generic Learning Outcomes defined by the Australian Government).

This overwhelming positive feedback from international industry peers and day-to-day visitors, recognises Scitech at the forefront of STEM communication and engagement. This is more important than ever, as we look to a future where these areas form the basis of a prosperous Western Australia, both financially, creatively and scientifically.