You are here: Home » Articles filed under: 'News' » Article: 'Screen industry under microscope' 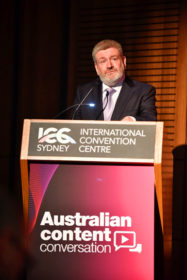 With two parallel yet overlapping inquiries under way into the Australian screen sector, what can the industry realistically hope will be the outcome?

Perhaps a requirement on Netflix, Stan and other streaming services to screen a specified amount of local content?  The long-sought raising of the location and TV producer offsets, despite the entrenched opposition of Treasury?

Could a plan emerge to replace the local content quotas with a more flexible regime which does not threaten the current levels of children’s, drama and documentary production?

Or might both inquiries amount to a waste of time and effort whose reports will gather dust on a shelf, the fate of the 2012 Convergence Review commissioned by the Labor government, as some industry pessimists fear?

Communications and Arts Minister Mitch Fifield has said the content review being jointly conducted by the Department of Communications and the Arts, Screen Australia and ACMA will aim to come up with sustainable policies to ensure the ongoing availability of local content. He identified some ‘gaping holes’ in government regulation and incentives in the face of the digital disruption brought on by the likes of Netflix and its ilk.

Fifield described the House of Representative’s parliamentary committee inquiry into the growth and sustainability of the film and television industry as a “complementary process” and that the submissions would contribute to the review.

All fine words, but will there be beneficial results for the wider screen industry? Jenny Buckland, CEO of the Australian Children’s Television Foundation, seems cautiously optimistic.

“Given the Australian and children’s content review has been announced I don’t think the House of Representatives review will give a lot of very specific recommendations,” she told IF.

“So the most that we are realistically hoping for from that review is an acknowledgement of the special significance of children’s television, which is operating in a very challenging environment at the moment, and a recommendation that the government should implement a new policy framework to ensure that Australian children’s television continues to be produced in future.”

Australian Directors Guild CEO Kingston Anderson wonders whether or how the two inquiries will feed into each other. Anderson said the guild’s main concern is that the content review might lead to the reduction or scrapping of the local content quotas. He warns that under the Free Trade Agreement with the US that if those protections are taken away they can never be re-legislated.

Anderson acknowledges the current regulatory regime needs to change to reflect the modern era but stresses, “We can’t abandon the system without having something which is equally effective to replace it.”

Screen Producers Australia CEO Matt Deaner said, “We want to see a strong commitment from the government to the small businesses in the independent production sector that employ thousands of Australians, generate $1.7 billion in economic activity and work to reflect and define our national character.

“We are optimistic that the government is keen to tackle some of the hard issues facing the sector and there are a number of options that we intend to explore with the review team throughout the upcoming review process.”

SPA’s submission to the parliamentary inquiry calls for, inter alia, the restoration of public funding levels for Screen Australia, ABC and SBS back to pre-May 2014 levels; content obligations on public broadcasters together with oversight responsibilities for the ACMA; and removing the requirement for union consultation in the granting of temporary visas for foreign actors and technicians.

Despite the government’s reluctance thus far to increase the TV offset to 40 per cent, that is the area that needs the most urgent attention, according to Screentime executive chairman Bob Campbell.

“That would provide certainty for independent producers against the current uncertain environment where Screen Australia has too little funding to meet the market demand,” he said.

The House Standing Committee on Communications and the Arts will have plenty of recommendations and ideas to ponder when it conducts public hearings in Canberra (June 16), Katoomba (July 12), Brisbane (July 13), Sydney (July 19/ 20) and Melbourne (July 26).

There were 142 submissions to its inquiry.  The overwhelming majority called for parity between the TV and film producer offsets and raising the uncompetitive 16.5 per cent location offset to 30 per cent.

Ausfilm, Fox Studios Australia and Animal Logic were among those calling for offshore producers to be entitled to access both the location offset and the PDV offset to encourage projects to be filmed and have their post done in Australia.

Productions commissioned by streaming services should also be eligible for both offsets, they said.

The ADG is among those pressing for Australian content quotas to be applied to all players that are active in the market including Netflix, Amazon Prime, Google/YouTube and Stan. Its wish list includes guaranteed funding with CPI increases for the ABC and SBS for drama, children’s and documentary; increased funding to Screen Australia by $50 million per year; and maintaining funding with CPI increases to the AFTRS, NIDA and Ausfilm.

The ADG also renewed its calls for increased recognition of directors’ copyright and for a review of the regime for visas for foreign directors who are flooding the country to shoot TVCs, undercutting Australian directors.

Nine Entertainment Co (NEC) questioned the need for the children’s quota when the ABC already provides ample children’s programming on ABC2, ABC3 and iview, plus a plethora of new digital destinations for that genre.

NEC complained that the public broadcasters continue to encroach on the already well-serviced space of commercial TV, suggesting the proliferation of media alternatives is eroding the traditional arguments for generously funded public broadcasters.

“SBS’s content acquisitions appear to be based on chasing commercial ratings and revenue while not servicing its charter or target audience. This alone is a significant factor in driving up the cost of commercially attractive content while eating into commercial TV revenues,” NEC said.

The Nine Network was outbid by SBS for food programming from US-based distributor Scripps, and SBS pre-bought The Night Manager based on the script, a risk Nine was unwilling to take without seeing the final product.

Buckland told IF, “ At this stage in the review, I think it’s too early to say whether these are “realistic” outcomes, but I note that the Minister has framed the review from the perspective that protecting Australian children’s content is very important, so I am hopeful that these recommendations will be very seriously considered.”