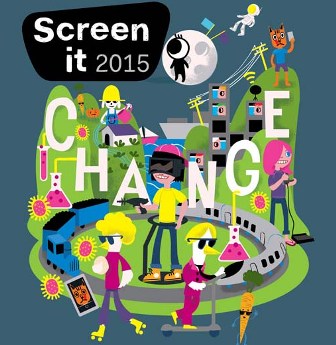 Entries are now open for Screen It 2015, Australia’s largest competition for school-aged filmmakers, animators and game makers, run annually by the Australian Centre for the Moving Image (ACMI).

Primary and secondary students around Australia have been creating live-action films, computer games and animations inspired by this year’s Screen It theme: Change.

Entries close on Monday 21 September 2015 so it is not too late to enter. Students can enter via their school or independently, and entries can be created by individuals or teams.

Joining the judging panel this year is newly appointed Screen It Ambassador, Robert Connolly. Robert is the screenwriter and director of Paper Planes (2014) based on the popular children’s book by Steve Worland, as well as thriller The Bank (2001), the harrowing Balibo (2009) and biopic Underground: The Julian Assange Story (2012).  As a producer, Robert is credited with the critically acclaimed Romulus, My Father (2007), The Turning (2013) and television mini-series Gallipoli (2014)

Robert joins Screen It Ambassadors Steven “Bajo” O’Donnell and Stephanie “Hex” Bendixsen, hosts of ABC TV’s Good Game, who will also host the glittering Screen It Awards Ceremony in November 2015. Special guest at the awards will be Shaun Tan, freelance artist, author and illustrator whose acclaimed books include The Lost Thing, which is also an award-winning animated film, written and co-directed by Tan.

ACMI Education Manager Christine Evely said: “We are thrilled to have the support of our talented ambassadors who, together with Shaun Tan, offer great inspiration and encouragement to a talented new generation of moving image creators.”

“Once again, we look forward to discovering the myriad ways in which this year’s theme will spark imaginative and transformative storytelling through the films, animations and video games created by young people from around the country.”

Unlike many other student film competitions, Screen It is designed to provide rich cross-disciplinary outcomes for participants. Feedback from teachers demonstrates the classroom value of the vast education resources developed by ACMI’s experienced educators, including a comprehensive education resource kit, video conferences for students and Generator, ACMI’s online creative tool designed to support students through the production process.

As well as providing a rich learning experience, Screen It offers fantastic prizes. Category winners will receive a certificate, a trophy and a prize pack. Primary and secondary winners of the animation and live action categories will take home a Canon HD Camcorder. Winners of the games categories will collect Sony Playstation products including a PS4, PSVita and the Tearaway: Unfolded game. The schools awarded Best Overall Primary and Secondary entry will each receive a Canon HD Professional Camcorder. Special Mentions awarded by the judging panel will be recognised with a prize pack from Madman Entertainment.

Winning entries will be incorporated in the Australian Mediatheque where ACMI visitors can view moving image works on demand, as well as being exhibited in ACMI’s Screen Worlds gallery on Generator, and on the ACMI website.

In 2014, the competition attracted 365 entries submitted by over 1,546 students nationwide, making it Australia’s largest moving image competition for young people – a title it has held for over ten years.

For more information and to submit an entry, please visit: acmi.net.au/ screen-it