The federal government is slashing funding for collection museums. Here’s why that’s dangerous. 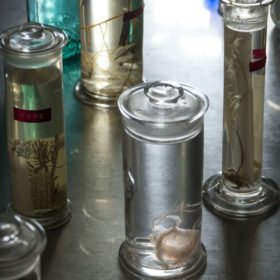 If you’ve ever visited a natural history museum and wandered past towering dinosaur skeletons and wild animals in display cases, you might be surprised to know that you probably saw just a fraction of the treasures held in that facility. Tucked away in the recesses of these familiar buildings, out of sight from the public, are rows and rows of meticulously preserved plants, insects, and animal carcasses. Though rarely seen by the general public, the vast, hidden collections have a life of their own as a hub of scientific research.

Scientists use these troves of curiosities to identify new diseases, map invasive species, and study the effects of climate change. For example, in 1993, researchers used a collection of frozen mice at the Museum of Southwest Biology to identify the origin of a dangerous strain of hantavirus—a mysterious and fatal disease that had emerged in the American Southwest. And in California, a large zoology collection has helped biodiversity experts find evidence of climate change adaptation among local wildlife.

During a recent episode of the Inquiring Minds podcast, Jack Dumbacher, chairman and curator of the California Academy of Science’s Department of Ornithology and Mammalogy, gave host Kishore Hari a glimpse into the hidden world of museum collections. The California Academy of Science contains specimens that are up to 200 years old, and each one is carefully organized and easily accessible to researchers, just like books on a library shelf. Looking for an obscure species of insect? Just pull out a drawer and you can examine one of 10 million specimens held in the museum’s entomology collection.