You are here: Home » Articles filed under: 'News' » Article: 'Secrets of the Deep'

Secrets of the Deep 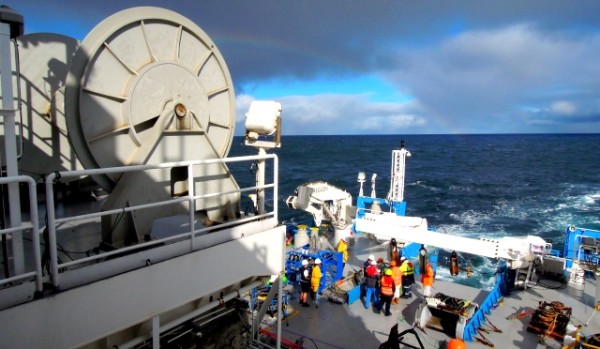 Crew unloading a sample on the deck of RV Investigator. Source: SA Museum.

The South Australian Museum is helping to explore the deep sea floor off southern Australia. The goal is to collect and describe the creatures that live there – some up to 2000 meters below sea level. Today, World Oceans Day is a chance to reflect on these mysteries of the ocean.

“We’ve mapped the moon and even Mars, but we know very little about our oceans and the animals that live there, especially down deep,” said Dr Andrea Crowther, Collections Manager – Marine Invertebrates, South Australian Museum.

“Healthy Oceans, Healthy Planet is the theme of World Oceans Day this year and it’s a chance to put the spotlight on these unexplored ecosystems,” Dr Crowther said.

“We need to know what healthy ocean systems look like so that we can protect them and monitor changes over time.”

Sailing into the Southern Ocean south of Tasmania in the Huon Commonwealth Marine Reserve, Investigator’s mission was to test equipment for sampling animals which live on and just below the sea floor, known as the benthic zone.

Investigator has a range of equipment to sample the sea floor.  From grabs – big metal claws that literally grab handfuls of sediments and rocks – to sleds that skim along the sea floor and capture marine life in nets. Around 30 scientists and 20 crew on the voyage work around the clock in two, 12 hour shifts from 2 am to 2 pm or 2 pm to 2 am. A voyage may typically last for 20 days and collect many samples that will be deposited at various museums around Australia for safe keeping into the future.

“The exciting part is that you never know what you’re going to get in a sample.  Sometimes you get very little, sometimes you get hundreds of different animals. It’s a challenging but rewarding experience”, Dr Crowther said.

“Once sampling starts, everything is laid out on benches in the wet laboratory, and it’s a massive process to sort through it all and identify, label and preserve specimens.”

On only its second voyage, testing equipment and sampling procedures on Investigator will help prepare crew and scientists for longer missions. Future voyages will enable the team to collect samples from the deep seabed of the Great Australian Bight off the South Australian coast.

“These expeditions are so important for us to learn more about marine life and the role it plays in our oceans. It’s easy to ignore what we can’t see, but voyages like this bring the fascinating creatures of the deep ocean into the public gaze,” Dr Crowther said.

“Expeditions like this are incredibly expensive. Collaborating with other organisations is an invaluable opportunity for the Museum to collect samples and learn about life in the benthic zone that would otherwise be impossible,” Dr Crowther said.

About the South Australian Museum

The Museum cares for a wealth of treasures with national and international significance – it is one of Australia’s most admired and trusted scientific and cultural institutions. The Museum’s world class collections have been amassed over more than 150 years and encompass everything from fossils of the first known life on Earth to pieces of Martian meteorites. The Museum’s collections are still growing and used each day in scientific and cultural research.

The South Australian Museum is Australia’s most successful museum in terms of both competitive research funding and peer-reviewed publications. The Museum was awarded over $11 million in research grants in 2013–14 and its four research groups maintained a strong track record in biological sciences, mineral sciences, humanities and palaeontology. The Museum is a strong partner, with strategic relationships across the resources sector as well as with state and federal governments.