You are here: Home » Articles filed under: 'News' » Article: 'Secrets of the Museum at the V&A'

Secrets of the Museum at the V&A

February 13th, 2020 | Browse other: News. | Tagged with: Secrets of the Museum on BBC Two, Victoria and Albert Museum | 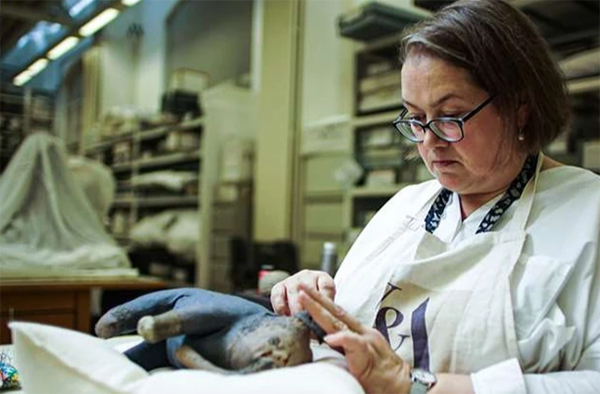 Patrick Cremona, Secrets of the Museum on BBC Two – everything you need to know, Radio Times, 6 February 2020

The new series gives viewers a look behind the scenes at London’s Victoria and Albert museum.

A new BBC Two series is offering viewers a look behind the scenes at one of London’s most iconic museums – the Victoria and Albert in South Kensington.

The series will consist of six hour-long episodes, looking at some of the artefacts that don’t make it to the display cases at the museum.

Here’s everything you need to know about the series…

What is Secrets of the Museum about?
The documentary goes behind the scenes of the world-famous Victoria and Albert Museum in London. Only a small amount of the two million items in the V&A’s collection are on display to the public.

This series gets a glimpse at the treasure trove kept behind closed doors and follows the experts and conservators as they breathe new life into some of these fragile items, such as Pumpie the 100-year-old toy elephant, who needs urgent TLC, and the Christian Dior gowns that get a new lease of life.

Is there a Radio Times review?
Yes, Radio Times critic Alison Graham provided the following take on the opening episode:

Prepare to lose yourself in quiet contemplation with a paper conservator in the first episode of a charming and rather lovely new series centred on the “backstage” work of the Victoria and Albert Museum.

There’s an army of these people beavering away in various departments, doing remarkably intricate preservation work. The paper expert is brightening and repairing a Victorian paper peep-show of the Great Exhibition of 1851. In the toy department, cherished Pumpie the elephant, a 100-year-old beloved family toy, looks a little forlorn, with a loose trunk and moth damage, until he’s spruced up.

Meanwhile, in textiles, everyone is flat-out preparing for a blockbusting Christian Dior exhibition featuring some of the designer’s most lustrous and beautiful dresses, including a weepingly lovely black pleated frock that once belonged to Martita Hunt, Miss Havisham in David Lean’s Great Expectations.

When is Secrets of the Museum on TV?
The first episode airs Thursday 6th February at 8pm on BBC Two, with subsequent episodes airing at the same time in consecutive weeks.

Each episode will be available to view on BBC iPlayer shortly after broadcast.