You are here: Home » Articles filed under: 'News' » Article: 'Selling the Dream' 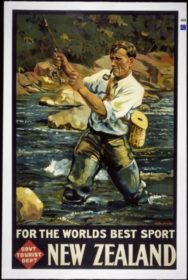 Selling the Dream, a retro exhibition of original classic New Zealand tourism posters created by leading commercial artists between the 1920s and 1960s opened on Saturday (19 November) for a limited time only.

Extremely popular when it debuted at the Museum in December 2014, the exhibition has toured New Zealand venues in the last two years and will have a two-month run at Canterbury Museum before opening at Waikato Museum in April 2017.

Museum Director Anthony Wright says the exhibition features some of the finest graphic art ever produced in New Zealand.

“These are stunning and arresting works, designed to be absorbed at a glance, yet memorable enough to subsequently secure a visit to New Zealand or a domestic adventure by New Zealanders. They were critical to building New Zealand’s tourism brand and industry and in helping shape how we think of ourselves as New Zealanders.”

In an age before television and the internet, posters on billboards, in railway stations and on buildings in towns and cities throughout New Zealand were the mainstay of advertising.

In the early twentieth century, their popularity and success in selling the dream of the country’s landscape and its numerous attractions to New Zealanders and international travellers was made possible by new technologies and central Government support.

New printing processes, including lithography and screen-printing saw the introduction of illustrations and colour in popular publications. Posters promoting theatrical performances and commercial items were increasingly visible from the early 1900s, reaching their golden age in the 1930s.

The exhibition features a 15 minute documentary Graphic Wonderland which explores the art, skills and techniques of commercial artists during the period. The documentary also goes behind the scenes of the industry with fascinating footage illustrating the work of commercial studios including the National Publicity Studios and Railways Studios.

New Zealand sought to compete with the best tourist attractions in the world by highlighting the splendour of Milford Sound and the magic of the thermal wonderland of Rotorua to attract tourists. Working for the Tourist and Railways Departments, artists like Leonard Mitchell and Marcus King created popular and inspired images of the landscape that captured the hearts and minds of its people.

An idealised New Zealand was portrayed in vivid colours, perfect composition and iconic images which appealed to the traveller’s dream of adventure in an island paradise.