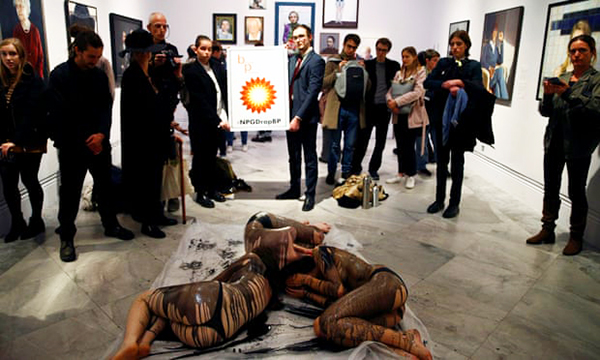 One activist said: ‘it’s atrocious that BP can try to cover themselves up by investing in art’. Photograph: Henry Nicholls/Reuters.

Semi-naked environmental campaigners have been drenched in fake oil at the National Portrait Gallery to protest against its sponsorship by BP.

To the surprise of visitors on Sunday afternoon, activists from Extinction Rebellion wearing just underwear suddenly assumed the foetal position while others poured the “oil” on their bodies in the Ondaatje Wing main hall, where a collection of pieces sponsored by BP is on display.

The protest performance piece, titled Crude Truth, was to mark the end of the BP Portrait Award exhibition.

After a monologue by clothed protester Eden, 19, calling on arts organisations to sever ties with companies “funding extinction”, one activist led a brief chant of “NPG, drop BP”.

The three activists covered in black liquid lay down for about five minutes on a plastic sheet before standing up again, wiping themselves down with towels, and cleaning up. Gallery workers had appeared to briefly close the doors to the room. However, the action, which was applauded by onlookers, passed uninterrupted.

What are Extinction Rebellion’s key demands?

The UK group of Extinction Rebellion has three core demands:

1) Tell the truth
The government must tell the truth about the scale of the ecological crisis by declaring a climate emergency, “working with other groups and institutions to communicate the urgent need for change”.

3) Citizens’ assembly
The government must create a citizens’ assembly to hear evidence and devise policy to tackle the climate crisis. Citizens’ assemblies bring together ordinary people to investigate, discuss and make recommendations on how to respond, in this case, to the ecological emergency.

In the US activists have added a further demand: “A just transition that prioritises the most vulnerable and indigenous sovereignty [and] establishes reparations and remediation led by and for black people, indigenous people, people of colour and poor communities for years of environmental injustice.”

One of the activists said the government and the cultural establishment were not working fast enough to deal with the climate emergency.

“We need everyone to do what they can,” said Samantha, 37. “The Portrait Gallery is very influential and they need to be leading the way on these issues. But instead they’re doing the opposite by being sponsored by a company who is living in the past when we have the technological knowhow to make renewable energies.”

Tommy, 18, also among the activists who took part in the performance, said: “It’s atrocious that BP can try to cover themselves up by investing in art. No one should work alongside them. The oil poured into oceans is killing animals.”

Other activists handed out literature criticising oil extraction plans and BP’s contribution to climate change. Security guards arrived after about 15 minutes, once the protesters had left.

The three decades of support the institution has received from BP is celebrated on display boards in the gallery.

The National Portrait Gallery said BP’s support for its portrait award encouraged the work of artists around the world and allowed for free admission to the exhibition, which had drawn more than 300,000 visitors this year.

“The ongoing debate around BP’s sponsorship of the arts raises important questions about both the environment and arts funding, and we are listening carefully to voices on all sides,” it said in a statement.

On Friday, Extinction Rebellion protested outside BP’s headquarters with members of the Free West Papua campaign group, while the company reportedly delivered a report on its activities in the Indonesian province.

The Royal Shakespeare Company this month announced it would end its sponsorship deal with BP amid growing public discontent with its eight-year relationship with the oil multinational. Tate ended its relationship with BP in 2016.

In February, activists occupied the British Museum to protest against BP sponsorship highlight how the company lobbied the British government to help it gain access to Iraq’s oil reserves prior to the war in the country. The institution later rejected calls to sever its ties with BP.

Almost 1,800 people were arrested over the past two weeks of Extinction Rebellion demonstrations, with activists blockading the BBC, preventing trains from departing and defacing government buildings.