June 12th, 2020 | Browse other: News. | Tagged with: Cultural institutions are feeling compelled to stand up for racial justice, protests over George Floyd’s death | 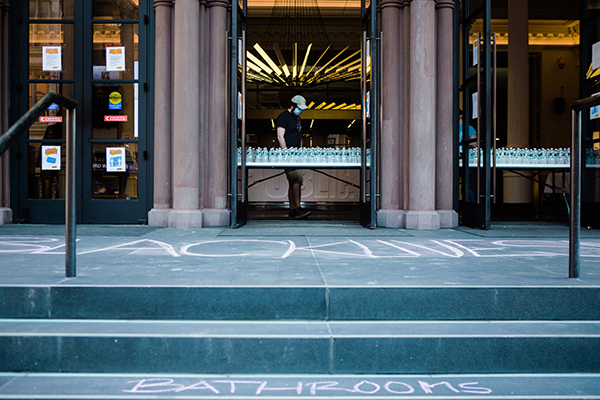 Water bottles inside the lobby of the Public Theater in New York, which opened to offer refreshment and the use of bathrooms to people protesting the death of George Floyd in police custody. Credit: Gabriela Bhaskar for The New York Times.

Cultural institutions are feeling compelled to stand up for racial justice, but artists and activists want action, not just statements of solidarity.

After the Nelson-Atkins Museum of Art in Kansas City, Mo., allowed the police to use its property to stage a response to a protest over George Floyd’s death, its director asked the police to gather elsewhere and issued a public apology.

When the Getty was criticized for putting out “vague” social media posts calling “for equity and fairness” that failed to mention Mr. Floyd, who died in police custody in Minneapolis on May 25, its chief executive pledged to do better.

The language of contrition was similar from the San Francisco Museum of Modern Art after it was criticized for responding to Mr. Floyd’s death with an Instagram post: an image of a work by the artist Glenn Ligon — who is black — without any statement from the institution.

“We can do better,” the apology said. The museum followed up with a second apology days later for having disabled comments in response to criticism of its initial post.

For decades, cultural organizations have generally opted out of politically heated debates, positioning themselves as neutral territory and preferring to let the artists they present do the opining. As civic institutions often supported by taxpayer dollars, they have historically eschewed political allegiances.

But this time is different.

In the period of protests, many arts organizations have entered the fray. Some of their public messages have been commended as better than silence; others criticized as tone-deaf and too little too late. 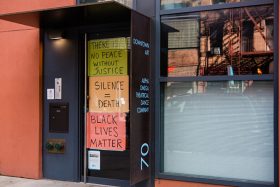 Such efforts to meaningfully contribute to the conversation are especially sensitive because many of the institutions are led by white executives who answer to boards largely made up of wealthy white trustees. That composition has long fueled suspicion that arts organizations are inherently resistant to — or incapable of — real change.

“It’s not enough to issue these toothless statements,” tweeted Adrianne Russell, a writer, museums specialist and former employee at the Nelson-Atkins, “and that’s why I wish museums would just be quiet unless they’re going to tell the truth.”

When the Metropolitan Opera tweeted last week that there was “no place for racism in the arts,” several people commented on social media that the company had never performed an opera by a black composer. (Their first — Terence Blanchard’s “Fire Shut Up in My Bones” — was announced last year but has yet to be performed.)

“I do not think art museums have done enough,” Chris Anagnos, the executive director of the Association of Art Museum Directors, said in a statement on the organization’s website. “We have dabbled around the edges of the work, but in our place of privilege we will never live up to the statement that ‘museums are for everyone’ unless we begin to confront, examine and dismantle the various structures that brought us to this point.”

Some responses have landed more successfully than others, namely the impassioned statement from Lonnie G. Bunch III, the secretary of the Smithsonian, who called on his professional cohort to step up. 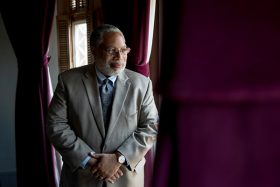 In his statement, Lonnie G. Bunch III, secretary of the Smithsonian, urged his colleagues in the museum world to do more to address racial injustice. Credit: Andrew Harnik/Associated Press.

“Will we join the struggle to seek justice and equality?” Mr. Bunch said. “Will we heed the call of courageous figures throughout history who spoke out against slavery, marched on for voting rights, and sat in for basic equality? Will we challenge the nation to live up to its founding ideals? In the memory of those taken from us and for the good of the country, I hope that we do.”

Other institutions tried a pragmatic approach. In New York, Off-Broadway and Brooklyn theaters, as well as the Brooklyn Museum and MoMA PS1, have offered restroom access to protesters. Theaters in cities such as Oakland, Calif.; Austin, Texas; and Washington, have done the same. The Smithsonian National Museum of African American History and Culture created an online portal for a discussion about race.

The Walker Art Center in Minneapolis announced it would no longer contract the services of the local police department for events until the law enforcement agency “implements meaningful change by demilitarizing training programs, holding officers accountable for the use of excessive force and treating communities of color with dignity and respect.” Four Minneapolis officers were charged in connection with Mr. Floyd’s death.

Many organizations that view themselves as enlightened, progressive institutions decided they could no longer sit on the sidelines in order to avoid controversy.

“We are part of that problem — the racism is within us — as institutions that are always telling our audience what’s good art and making choices that set up or reinforce cultural orders,” said Michael Govan, the director of the Los Angeles County Museum of Art. “We have an ability to critique and change those orders.” 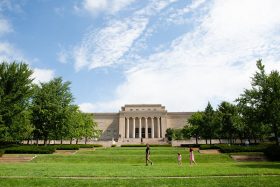 Officials of the Nelson-Atkins Museum of Art in Kansas City, Mo., apologized after allowing the police to use its grounds to stage a response to a protest about the death of George Floyd. Credit: Katie Currid for The New York Times. 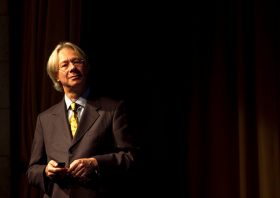 Julián Zugazagoitia, the director of the Nelson-Atkins Museum. Credit: Steve Hebert for The New York Times.

The conversation about the complacency of arts groups was building long before their recent public statements of solidarity or their posting of black boxes and #BlackoutTuesday on Instagram were judged insufficient.

The Whitney Museum of American Art faced criticism when it featured in its 2017 Biennial exhibition a painting by the white artist Dana Schutz of the lynched black teenager Emmett Till, incurring protests. It kept the painting on the wall, saying it raised important questions.

Last year, the museum was the site of multiple demonstrations because one of its trustees, Warren B. Kanders, owns a company that sold the tear gas that was reportedly used on immigrants at the border. He ultimately felt compelled to step down.

Four of the 14 curators now are people of color, and the museum has featured black artists in earnest but acknowledges there is much more to do. “Everybody has to look at themselves and say, ‘We’re all not doing this as well as we should be,’” said Adam D. Weinberg, the museum’s director. “If you don’t have input from other voices, you’re just going to get the same answers.” 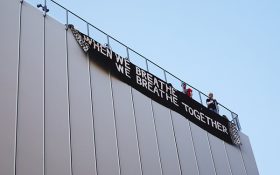 Protesters last year at the Whitney Museum in New York draped a banner over an edge of the building. Credit: Andrew White for The New York Times.

Many of these cultural organizations did not respond at all when Amadou Diallo was shot dead by the police in the Bronx in 1999 or Michael Brown was killed by an officer in Ferguson, Mo., in 2014. But this time around, the approach has changed, whether it’s because the politics of the moment have triggered advocacy or because the multiple fatal encounters with the police can no longer be ignored.

“They’re using language that they’ve never used before in terms of racism and white supremacy,” Melanie A. Adams, the director of the Smithsonian’s Anacostia Community Museum, said of museums. She has worked as a facilitator of workshops on topics related to museums and race.

Ms. Adams said that she had noticed a shift in museum attitudes after the shooting of Mr. Brown and believes some of the change may be attributable to more young activists working in institutions. The challenge, she said, will be sustaining the discussion that currently feels so urgent. “Sometimes with these situations, for the next few months we’ll all wave the social justice flag, and then we’ll go back to our corners,” she said, “I’m hoping that’s not going to be what happens this time.”