You are here: Home » Articles filed under: 'News' » Article: 'Sheer delight – at the State Silk Museum' 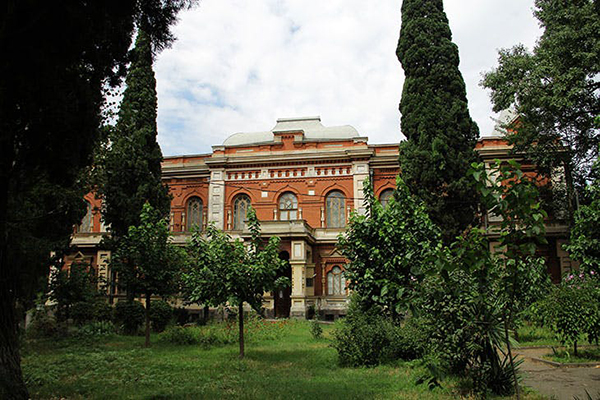 Few visitors to Tbilisi, Georgia’s charming, crumbling capital, know that the city holds the world’s most significant collection of silkworm cocoons. In recent years, growing numbers of tourists have sought out the country’s gobsmacking nature and gob-filling feasts, but the esoteric delights of a late 19th-century museum devoted to the silkworm, Bombyx mori, and all its products, make for a road less travelled. When I visit the State Silk Museum on a bright December afternoon there are only two other punters. 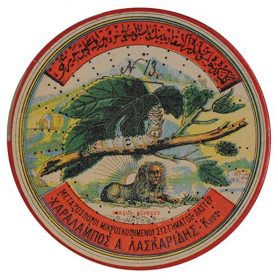 The museum is housed in a fine red brick building of 1891, with something of the Victorian school about it, set back from the street in a grove of (what else?) mulberry trees. Once the centrepiece of an industrial sericulture station, established by the tsarist authorities to modernise and increase production in this distant frontier of the empire, the building is now overshadowed by a huge Soviet football stadium. Together, this structure and the museum – which is almost tucked beneath the stands – present a tableau of two fallen empires, side by side, as the city of Tbilisi grows and changes around them.

Inside the museum, however, the feeling is of continuity rather than change. The building is freezing. The heating has been broken for decades – or so it seems – and as I pull my overcoat tighter it’s impossible not to think of the bad old Tbilisi of energy shortages and wood-burning stoves poking out of once-glamorous homes. Still, it is the fact that the museum is basically untouched that makes it so special.

Alexander Szymkiewicz, a Polish architect who built many of the city’s landmarks, was not afraid of a bit of architecture parlante. In the museum’s stairwell, 18-inch stucco silk moths grace the capitals of pilasters while giant silkworms munch mulberry leaves on the capstones of decorative arches. Szymkiewicz also designed the exquisite cabinetry in the exhibition halls and the bookshelves in the library, the latter of which recapitulate the building’s facade in apricot wood. 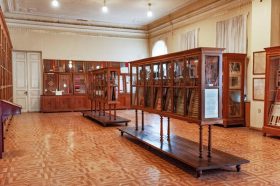 It is Szymkiewicz and Nikolai Shavrov, the first director of the Caucasian Sericulture Station, who are most responsible for the museum as it has come down to us: a comprehensive exposition on the life cycle of the silkworm, the propagation of the mulberry, the methods of silk production, dyeing and weaving. Shavrov devoted his life to sericulture, and most of the museum’s collection – mulberry wood, cocoons, dye stuffs, fabric samples, looms, walls of preserved leaves and silkworms in formaldehyde – originally belonged to him. The objects were assembled during his travels around the silk industry of Europe, and brought to Tbilisi to educate the recently emancipated serfs of the Caucasus in the latest technologies. This educational mission was the raison d’être of the museum until silk production started to fall into abeyance in Georgia in the late 20th century.

When Shavrov began his work in the Caucasus, silk production was being devastated by pebrine, a microorganism disease eventually brought under control by Louis Pasteur, whose photograph benevolently overlooks the main exhibition hall. Pasteur’s work on the pebrine crisis was one of his proudest achievements, and led to the establishment of sericulture stations across Europe – the Silk Museum is the only one left intact. One of the museum’s most charming collections, now in storage, is of cardboard presentation cases for ‘certified pebrine-free’ silkworm eggs. Decorated like fancy cigar boxes, but perforated with air holes so the eggs could survive, the Greek, Persian, Russian and Georgian lettering bears witness to the globalised world of pre-war silk. 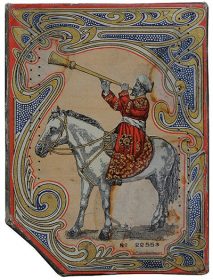 The heart of Shavrov’s collection, though, is the cocoons. Thousand upon thousand of fluffy ovals, a bit smaller than your thumb, ranging from pure white through grey and into pale yellow, all packed tightly into Szymkiewicz’s sturdy vitrines, or stacked floor to ceiling in his specially devised storage shelves. The collection, the largest in the world, contains examples of some 4,000 varieties of silk-producing cocoons, and is being subjected to isotopic analysis by researchers from Harvard – a fittingly technological coda for Shavrov’s modernising mission.

For all their progressive emphasis, the silk station and museum succeeded because Shavrov’s efforts were grafted on to the Caucasus’s indigenous history of sericulture. Georgia has been producing true, Bombyx mori, silk since the fifth century, and played an important role in the transmission of the secret of sericulture from the East to the Byzantine Empire in the 550s. Ancient mulberry trees dot the landscape from the Black Sea to the Caspian Sea, and neighbouring Azerbaijan continues to produce high-quality silks to this day. A large part of the display is devoted to Azerbaijani jejims, striped silk blankets woven in strips that are embroidered and sewed together. The jejims, some faded from a century of sun, others as bright as the day they were dyed, are mounted in cabinets across a whole wall of the museum, and lead the visitor seamlessly into the rest of the textile collection: French lace from Jacquard looms, ikat work from Central Asia, shibori from Japan.

It is here that the modern world begins to make an appearance. Sumptuous kimonos donated from Japan and modern Vietnamese silks have found their way into the permanent collection in a process of accretion that pays testament to Shavrov’s original vision, and to the foresight of the women who have acted as custodians of the Silk Museum for the last 30 years.

In the mid ’90s – a time of chaos and war in Georgia – a group of young textile artists discovered the Silk Museum, which, having been shuttered from the 1960s to the ’80s, was then part of a moribund and bankrupt national institute. The museum was clinging on through the efforts of its elderly director, Irina Chotorlishvili. She understood the importance and integrity of the collection, and joined forces with the textile artists – one of whom, Nino Kuprava, is the current director. The team fought resolutely to keep the collection together, housed in its purpose-built location. After seeing off eager developers, and the neighbouring stadium’s idea for a football-themed hotel, the Silk Museum was finally brought under the protection of the Ministry of Culture in 2006.

Since then it has quietly thrived. By retaining its 19th-century appearance it has emerged as an eminently postmodern ‘museum of a museum’, while simultaneously turning itself into Tbilisi’s leading contemporary art space. Over the last 10 years it has thrown itself open to artistic interventions (some are still there, hidden among the chrysalises), performance art, book launches, installations and temporary exhibitions. During my visit there was a show of ikats by the Uzbek artist Dilyara Kaipova, who blends pop culture into the archly traditional world of Central Asian textiles.

The Georgian silk industry finally collapsed along with the Soviet Union, rendering the museum’s didactic mission obsolete. It is remarkable the museum survived at all. But rather than being pickled like the silkworm pupae in its cabinets, it has metamorphosed into a living institution, and carved out a place for itself in the cultural life of the city. And as the curators point out, if anyone in Georgia were to start making silk again, they would be well placed to help out.