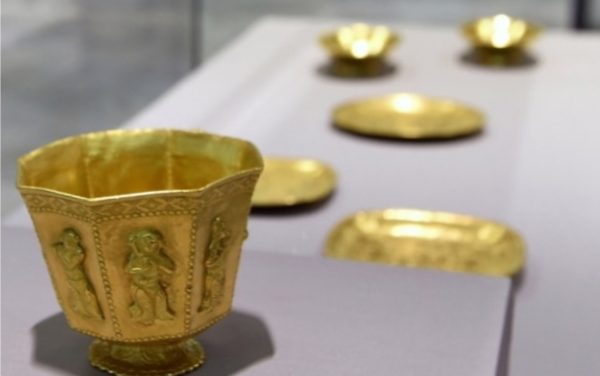 A gold cup recovered from the Belitung Shipwreck is seen on display at the Asian Civilisation Museum in Singapore in November 2015.  Credit: Roslan Rahman, Getty Images.

Archaeologists worry that a museum exhibition will encourage exploitation of priceless historical sites.

A museum show of sumptuous treasures from a ninth-century shipwreck is being denounced by researchers, who say that commercial salvage of the artefacts irreversibly damaged the wreck’s scientific value.

On 6 February, the Advisory Council on Underwater Archaeology sent a letter of opposition to the Asia Society, the non-profit group that is mounting the show of Chinese Tang-dynasty porcelains, gold vessels and other objects from the wreck at its New York City museum. Critics fear that the exhibition, slated to open on March 7, will encourage exploitation of wrecks by for-profit firms.

Museums that show salvaged treasures don’t intend to promote treasure-hunting, “but that’s the effect it has”, says Marco Meniketti, an archaeologist at San José State University in California who leads the advisory council.

Artefacts from the Belitung wreck, named after the Indonesian island close to the ship’s final resting spot, were scheduled to go on display at the Smithsonian Institution’s Sackler Gallery in Washington DC in 2012. The institution cancelled the exhibition in December 2011 after vocal opposition from Smithsonian scientists and others.

But the problems presented by exhibiting the spoils of commercial salvage remain, says maritime archaeologist Filipe Castro at Texas A&M University in College Station. That type of excavation “silences all the questions that a vessel like that could answer”, he says, reeling off a list of data that should have been collected at the Belitung site.

In a statement, the Asia Society said that “American audiences should have an opportunity to see this material because of its significance”. In recognition of “the sensitivities” around the exhibition, the society is co-sponsoring a public symposium about the ethics of archaeology and commercial salvage.

With 17,000 islands and a location central to maritime trade, Indonesia is rich in shipwrecks. But it is less endowed with resources to protect and study them. After fishermen found the Belitung wreck nearly 20 years ago, looters began to circle the site. Seabed Explorations of Nelson, New Zealand, received a contract to excavate the wreck.

Company staff discovered a spectacular hoard on a Middle Eastern ship bound for an empire that included present-day Iran and Iraq. The wreck confirms that sea-based commerce between China and West Asia was thriving more than a millennium ago.

Workers recovered some 60,000 artefacts during field seasons in 1998 and 1999. In 2005, a subsidiary corporation set up by the government of Singapore purchased the cargo for US $32 million. The artefacts now belong to Singapore’s Asian Civilisations Museum.

Archaeologists tracking the Belitung objects point to a 2001 convention of the United Nations Educational, Scientific and Cultural Organization (UNESCO), which states that “underwater cultural heritage shall not be traded, sold, bought or bartered as commercial goods”. Such commerce results in the destruction of archaeological sites, says Diane Gifford-Gonzalez, an archaeologist at the University of California, Santa Cruz, and president of the Society for American Archaeology, which opposes the New York show. (Indonesia, Singapore and the United States are not parties to the UNESCO convention, which calls for sanctions against violators.)

Researchers also say that when salvage companies control a site, they have an incentive to focus on eye-catching treasures instead of scientifically valuable items such as potsherds, which can be easily overlooked. The New York show is “creating a precedent for continued destruction of sites”, says maritime archaeologist Jeremy Green at the Western Australian Museum in Fremantle, near Perth.