April 6th, 2022 | Browse other: News. | Tagged with: Shipping costs are skyrocketing—and galleries are expected to be hit hard | 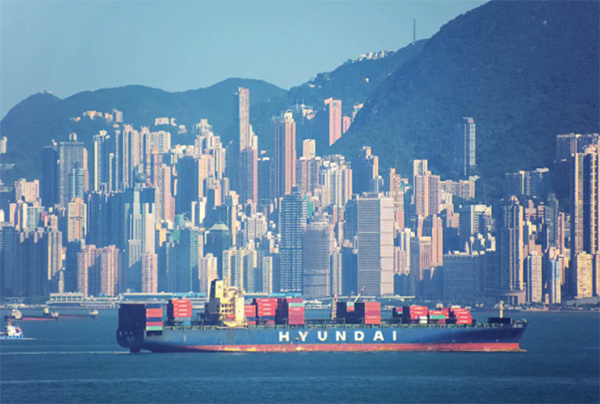 While Art Basel in Hong Kong, which takes place next month, is the first fair that could feel the impact of increased transportation costs, many galleries have already shipped works and free storage is being provided. Photo: Jeremy Bezanger.

Oil price increases and the inability to fly over Russian airspace has made sending art abroad, especially between East Asia and Europe, much more expensive.

Russia’s invasion of Ukraine has caused the cost of international shipping to skyrocket. Oil prices last month reached their highest in 14 years as Nato countries vowed to wean themselves off Russian energy by the end of the year, causing extreme market volatility. This, combined with the inability to fly over Russia and Ukraine’s vast combined airspace, has made shipping art overseas, in particular between Europe and Asia, much more expensive—and major fairs in Asia are expected to be hit hard.

“I’ve not seen anything like this since the 2008 recession,” says Victor Khureya, the operations director of the shipping firm Gander & White. “I’m getting estimates of air freight from Europe to China, Malaysia and Japan between eight to 12 times the usual cost.” The situation appears even more dramatic elsewhere. Edouard Gouin, the co-founder of Convelio, a fine art shipping logistics company, says that a Chinese client was recently quoted $58,000 to send a container to northern Europe. This journey, he says, would have cost around $3,000 in early 2021—a markup of around 20 times. Gouin adds that while no one can predict such a rapidly evolving situation, he does not expect things to ease “for at least the next three months.” Both shippers say that commercial gallery clients have cancelled orders due to surging costs.

What this means for forthcoming fairs remains to be seen. An Art Basel spokesperson says: “This is a situation evolving rapidly and we will stay in close contact with our galleries to best support their participation in the weeks and months to come.” While its Hong Kong fair (25-29 May) is the first to be affected, the fair’s spokesperson says that many exhibitors have already shipped their art and that Art Basel has negotiated free storage in the city with its shipping partners. They add that galleries withdrawing from Hong Kong now are subject to the usual cancellation fees, while withdrawing from the Basel fair at this stage would leave exhibitors liable to pay 50% of the booth fee.

Frieze, which launches its inaugural Seoul fair in September, declined to comment, but it is understood that it is monitoring the situation and that galleries have until June to pull out and still receive a full refund.

Meanwhile, Angus Montgomery Arts, the largest organiser of Asian fairs, has yet to announce contingency plans for a fair cancellation but a company spokesperson says they are “keeping an eye” on the situation as it unfolds. Meanwhile a spokesperson for the Korean Pavilion at this month’s Venice Biennale says that air shipping costs have “taken up a lot” of their budget.

Some knock-on effects predicted by shippers include smaller and less bulky works being sent across the Asia-Europe route. Moreover, a huge increase in sea freight is expected, as flying around Russia can add up to five hours to a journey. “Sea freight was already something that a lot of our clients have considered for environmental reasons as it uses 10 times less fuel than flying by air,” Gouin says.

Other less obvious causes behind surging prices are spiking insurance rates and a severe shortage of cargo vehicles and containers. Russia owns a large proportion of ships, containers and other machinery, none of which can now be used. Prices of the remaining vehicles have therefore risen due to massively increased demand. “This situation has been at a tipping point since the pandemic’s onset, which grounded flights and has caused labour and materials shortages and supply chain disruptions that continue to be felt today,” Khureya says. “This war has only made a difficult situation worse.”

Nevertheless, it is undoubtedly a lucrative time to work in shipping too. The French container transportation and shipping company CMA-CGM, the third largest in the world, reported a profit of €23.1bn in 2021, more than France’s largest two banks, BNP Paribas and Société Générale, combined.