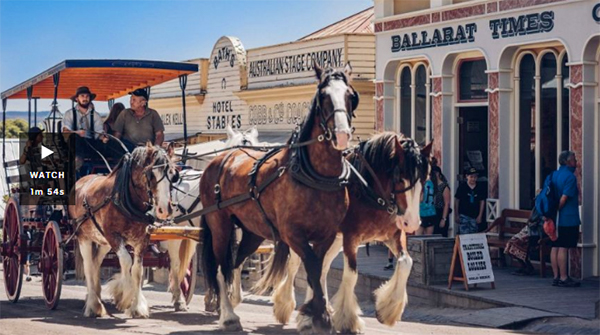 Master plan to keep telling Australian history ‘like no one else’.

Historical landmark Sovereign Hill at Ballarat has launched a 20-year master plan to preserve the stories of the gold rush era.

Until the pandemic, the not-for-profit had relied heavily on international tourists, with overseas visitors accounting for 15 percent of the annual visitation.

Over the years the museum has continually reinvented itself, as tourism trends changed, and it now plans to do so again to deal with the effect of the pandemic on the global market.

Chief executive Sara Quon said the master plan focussed on projects that would appeal to the local domestic market, as much as international tourists, to ensure the survival of the living museum.

“We, like others, felt the effect of COVID-19 very early, right from the end of January. Before we could see it manifesting in Australia, we were feeling the visitation impact.

“We want to make sure we’re continuing to inspire future generations of Australians, and also international visitors, [to get an] understanding of this part of Australian history.”

The outdoor museum has recreated the history of the Ballarat gold rush that began in 1851, depicting the schools, shops, and underground mines of the decade.

In 2019, the Federal Government committed $10.1 million to Sovereign Hill, and that would be used to develop the first phase of the master plan by mid-2022.

By 2040, it is estimated the expansion would add an additional $191 million to Ballarat’s economy each year, and an extra $202 million to Victoria. 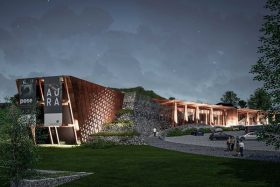 A new arrival centre and exhibition space, the Gold Pavilion, will also be established in the first phase.(Supplied: The Sovereign Hill Museums Association Limited).

The Sovereign Hill Museums Association has announced a Centre for Rare Arts and Forgotten Trade (CRAFT) will be built in the first phase.

The concept is to preserve the skills required for trades in leather, metal and textiles.

“To have a centre that helps to keep these near-forgotten trades alive,” Ms Quon said.

“I’m sitting here in Ballarat today surrounded by heritage architecture and the idea that in decades to come there wouldn’t be the skills to maintain these heritage buildings is something we couldn’t live with.”

Ms Quon said it would keep the cultural heritage alive, but would also lead to visitors returning to Sovereign Hill for workshops.

“There’s a fantastic opportunity for talented artisans … to come and share their skills and passion,” she said.

A new arrival centre and exhibition space, the Gold Pavilion, will also be established in the first phase.

“We welcome just over 500,000 visitors a year at the moment, and that will grow over 20 years to 1.4 million [per year], so it’s important we have a sense of arrival to help people connect to the stories we tell,” Ms Quon said.

Ms Quon said the exhibition space would mean 60 percent more of the museum’s collection would be on display. 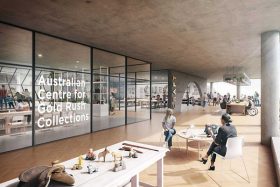 The living history museum currently sees around 500,000 visitors per year, but that is expected to reach 1.4 million people each year by 2040.

Ms Quon said the success had been born from the community-led involvement and the timelessness of the stories.

“It’s come from the passion of locals to tell an important part of Australia’s history in a way like no-one else,” she said.

“We tell stories of humanity, they’re stories of conflict, of courage, of migration, of resilience.

“They’re stories that are as relevant in 2020 as they were in the gold rush.”

Ms Quon said as Chinese tourists began to visit Australia, Sovereign Hill was an early tourism attraction to invest in the market.

“[Sovereign Hill] recognises that Chinese migration is an important part of the gold rush story,” she said. 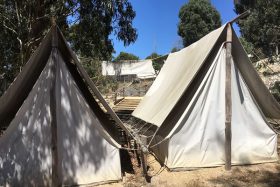 Sovereign Hill re-creates life on the Ballarat goldfields in the 1800s.(ABC: Dominic Cansdale).

Ms Quon said a key part of the museum was to tell the diverse stories of the gold rush era in a hands-on environment.

Along with the new centres, the number of students attending Sovereign Hill for education programs each year is expected to grow from 110,000 students to 275,000 visits annually.

“We also see a really rich connection between our education offering and the centre for rare arts and forgotten trade.”

The museum association currently has 250 volunteers, and that’s expected to continue to grow as the museum expands.

“It’s an amazing story because as many organisations are struggling to attract volunteers, it’s actually a part of our model that continues to grow,” Ms Quon said.