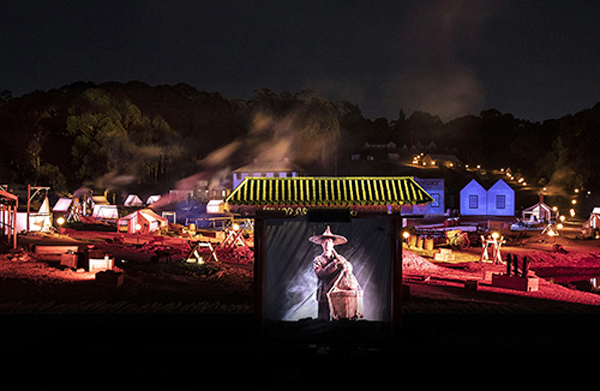 Having opened to the public earlier this year, Aura has already wowed thousands of visitors, providing an immersive multi-sensory experience.

“We believe we have developed an experience that will not only excite the whole family, but continue to drive forward our local tourism economy.”

Conceived by Andrew Walsh AM and his Accolade Event Management team, who have delivered events that include the Opening and Closing Ceremonies of the Melbourne Commonwealth Games and the first four years of White Night, together with Sovereign Hill’s own historical experts, Aura takes guests of all ages on an adventure as they witness the creation and discovery of the world’s most precious metal, Gold.

Walsh added “Aura brings together the rich stories of this place from the beginning of time. It tells of the traditional owners of this land and in the voices of those who were there the incredible story of how gold changed everything.

“The show has been two years in the making and is a tribute to the creativity of teams involved. I’m looking forward to seeing how audiences respond. We’re confident that they will love it.”

For more information and tickets go to www.aurasovereignhill.com.au

Positions Vacant » View All
» Collections Officer, Documentation – SLM
» First Nations Tour Guide – Australian Museum
Latest News » View All
Heritage tractor advocates seek support
under Aus Movable Cultural Heritage Act Read more.
Stockman’s Hall of Fame reopens – kelpie
entices families with what kids want Read more.
AWM’s Anzac Hall closes in prep – but
AWM to remain open during redevelopment Read more.
RAAF marks centenary nationally
& Queen attends Runnymede memorial Read more.
OM opens Fashion FWD >> Disruption
through Design exhibition Read more.
Top +
Council of Australasian Museum Directors, c/o Ms Daryl Karp, Museum of Australian Democracy at Old Parliament House PO Box 3934 Manuka, Australian Capital Territory 2603 Australia, © CAMD 2021
Copyright: All information and resources provided on this website remain the copyright of the Council of Australasian Museum Directors. Permission is granted for viewing and downloading for personal and not for profit purposes. Those wishing to reproduce any materials for commercial, educational or other uses are requested to contact us.
Disclaimer: The content of this website is provided for information purposes only and is not intended as a substitute for professional advice. No claim is made as to the accuracy or authenticity of the content of the website. The Council of Australasian Museum Directors does not accept any liability to any person for the information or advice (or the use of such information or advice) which is provided on this website. The information on our website is provided on the basis that all persons accessing the site undertake responsibility for assessing the relevance and accuracy of its content. No responsibility is taken for any information or services which may appear on any linked web sites. Hostgator.
.